Taken from the grade book of a teacher who wonders if the rest of the class is finally compensating for the loss of its star pupil, here is the Pittsburgh Steelers Report Card for the win over the Falcons at Heinz Field. 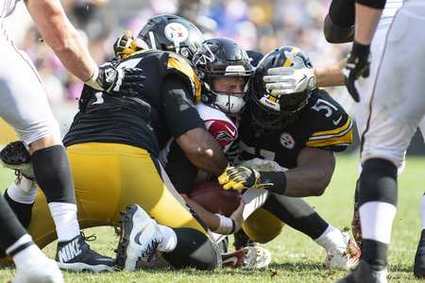 Quarterback
Ben Roethlisberger had an efficient day, posting his lowest yardage and passes thrown totals. It was certainly his most complete performance, as the Steelers converted 9 of 12 third downs and Big Ben tossed 3 touchdown passes. Still, Ben Roethlisberger took time to get warmed up and took points off the board with a costly end zone interception. Grade: B

Running Back
James Conner delivered just as many were questioning the Steelers confidence in him and fans were warming to welcoming Le’Veon Bell back. James Conner dominated with 110 rushing yards and 75 yards receiving, while scoring 2 touchdowns. James Conner fumbled, which is worrisome. Roosevelt Nix saw little action, but he road graded Conner into the end zone. Stevan Ridley got 8 yards on 5 carries. Grade: A-

Wide Receivers
Antonio Brown finally managed to get aligned with Ben Roethlisberger, and the duo clipped the Falcons for 2 touchdowns and 101 yards. JuJu Smith-Schuster made a leaping catch to haul in Pittsburgh’s 2nd touchdown. Ryan Switzer caught 1 pass for 5 yards. Grade: B

Offensive Line
Mike Tomlin argued that the Steelers “Big Men” decided this game by winning their 1-1 matchups. That would include an offense live that didn’t give up a sack, only allowed its quarterback to be touched once and only saw one running back dropped behind the line of scrimmage. Grade: A 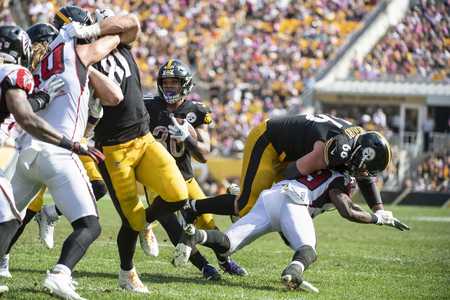 Defensive Line
Cameron Heyward led the unit with 3 tackles, 1.5 tackles for losses and a sack and a half. Javon Hargrave also had ½ of a sack, while Stephon Tuitt had two tackles. Falcons running backs only gained 52 yards on the ground, and that starts with the line. Grade: A

Linebackers
After lurking in the background for the last few weeks, T.J. Watt was a man on fire, sacking Matt Ryan 3 times, forcing a fumble, dropping 5 Falcon runners behind the line of scrimmage and leading the Steelers in tackles. Bud Dupree helped drop two runners behind the line of scrimmage and helped pressure Ryan. Anthony Chickillo also helped drop two runners for a loss. Jon Bostic also had a piece of a sack and drop for a loss.

Tyler Matakevich had six tackles while splitting time with L.J. Fort, who book ended the defense’s splash plays with a sack of Matt Ryan on the first series and a fumble recovery for a touchdown in the 4th quarter. Grade: A

Secondary
Despite the 1-3 record the Atlanta brought to Pittsburgh, the Falcon’s passing attack had been prolific. That looked to spell disaster for the Steelers-sieve like secondary.

The Steelers secondary didn’t post a lot of flashy statistics, but they contained the Falcons passing attack, and forced them off the field on third downs. Mike Hilton showed his versatility as a pass rusher, and Terrell Edmunds made key stops. While Matt Ryan was often under duress, there were also times when he had time to throw, but failed to find anyone open. Grade: B+

Special Teams
The Steelers coverage units were strong and Ryan Switzer had a nice 23 yard return. Jordan Berry punted well. The key special teams play was of course Roosevelt Nix’s punt block, which sealed the game for the Steelers. Chris Boswell missed another extra point, but made his next five. Grade: A- 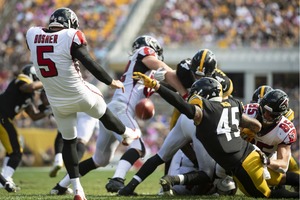 Coaching
Is this the same Steelers team that we saw in September?

While Randy Fichtner’s offense has produced points in fits and starts this season, the Falcons game was the first time the Steelers offense played consistently for an entire game. Sure, the passing game had its hiccups, but constancy in the running game more than compensated.

That would be the wrong conclusion, because the Steelers defense played its best game since Joe Haden got hurt last year against the Colts. For the first time since that afternoon, it actually felt like the Steelers defense was executing its game plan as opposed to reacting to an offense.

The loss to the Ravens had the potential to be particularly deflating, because the Steelers looked inferior throughout the night. However, if that was the perception outside of Pittsburgh, it was not shared on the South Side.

Not only did Mike Tomlin keep negativity from taking root, he had the Steelers out there playing with confidence for the first time all season, and it was confidence that allowed the Steelers to take control of the ball game. Grade: A

Joe Haden didn’t record any “Splash Plays.” Instead, he simply took the Falcons most potent offensive weapon out of the game, and for that Joe Haden wins the Unsung Hero Award for the win over Atlanta.