From the grade book of a teacher who wonders if his students are underachieving or simply underwhelming to begin with, here is the Pittsburgh Steelers Report Card for the 2018 home loss to the Ravens. 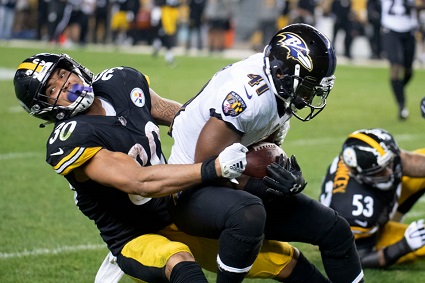 Quarterback
Again Ben Roethlisberger started slow in the 1st quarter, played like a stud in the 2nd quarter and then fizzled out in the 3rd quarter. The Steelers failed to cross the 50 in the second half and were 3-11 on third downs. Ben Roethlisberger not only missed several open receivers, he had several almost interceptions. Grade: F

Running Backs
James Conner had 19 yards on 9 carries and 3 catches for 15 yards. In contrast, Le’Veon Bell has owned Baltimore in the Steelers last three games and this Raven’s run defense, while improved is hardly impenetrable. The run blocking was suspect, but the Steelers needed more from Conners, and didn’t get it. Grade: D

Tight Ends
Vance McDonald and Jesse James caught every pass thrown their way and McDonald’s 33 yarder was impressive. However, his fumble set up Ravens’ touchdown and the Steelers defense doesn’t need its offense to do the opposing teams any favors. Grade: C-

Wide Receivers
JuJu Smith-Schuster had four catches and Antonio Brown managed 5 catches 11 targets. James Washington caught 2 of four. While it IS clear that Ben Roethlisberger is out of rhythm with his receivers, it does take two to tango, and there were many plays when no one was simply getting open. Grade: C

Offensive Line
Statistics say Ben Roethlisberger was only sacked once and hit once. But the pocket seemed to collapse quickly, and several of the Ravens front 7 batted down passes. Nor did the line effectively open holes for the running game. The Ravens won the battle of scrimmage. Grade: D

Defensive Line
Cam Heyward had 5 tackles and Stephon Tuitt had 4 with Javon Hargrave registering three, a tackle for a loss, and QB hit and a sack. The Ravens team rushing total of 3.2 years won’t impress any fantasy football owners, but Baltimore ran the ball when it needed to especially in the 3rd half. The Steelers defensive line failed to pressure Joe Flacco. Grade: D

Linebackers
Bud Dupree sacked Joe Flacco and had a decent night. Jon Bostic led the team in tackles, and looked to get men lined up properly. T.J. Watt had four tackles but was otherwise invisible. L.J. Fort looked good after Vince Williams got hurt. The Steelers linebackers weren’t a liability, but they failed get pressure and failed to deliver a 2nd half stop when it was needed. Grade: C-

Secondary
Joe Haden had an outstanding night – after whiffing on those two touchdown passes, one of which he and his fellow defender appeared to be confused on. Terrell Edmunds recovered a fumble that Sean Davis forced, although Edmunds barely avoided getting burned on a Joe Flacco overthrow. Baltimore was 8 of 17 on third down, and while that’s not all on the secondary, a lot of it is. Grade: D

Special Teams
Chris Boswell splitting the uprights not once, but twice for 34 and 39 yards provided the night’s lone bright spot. Jordan Berry also punted reasonable well and the Steelers coverage units didn’t give up any long returns. A special teams spark would have been nice. Grade: B

Coaching
The Post-Gazette’s Ron Cook channeled his inner Chuck Noll when he quipped, “The Steelers problems are great, and they are many.”

For all of the accolades that Ben Roethlisberger has won, and for whatever statistics milestones the offense had achieved before the game, the Steelers offense had been inconsistent all season long as it struggled on third downs disappeared for quarters at a time, only scoring 13 points in the 1st and 4th quarters.

That’s almost certainly a simplistic explanation, but it makes as much sense as any other offered. Clearly Ben Roethlisberger must be more consistent, but is just is clear that Randy Fichtner must create the conditions for Roethlisberger to be consistent. Thus far Fichtner has failed.

Is it Keith Butler‘s fault? Or is Mike Tomlin micro managing him? Has Kevin Colbert, with or without Mike Tomlin’s assent, emphasized drafting for athletic talent at the expense of polished football skill? Or are the Steelers assistants deficient in developing that talent? 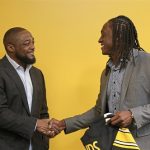 Sure the Steelers forced field goals and secured a turnover in the Red Zone, but that hardly matters when an offense can protect a 4 point lead by authoring back-to-back 6 minute plus 2nd half. If the Steelers coverage is so weak that it can only rush 3 men, then perhaps the disease is worse than the cure, because at least big plays get the offense back on the field quickly.

Worse, the 2018 Pittsburgh Steelers are not playing with confidence. Notice the change in demeanor between the Steelers before and after Vance McDonald’s stiff arm against Tampa. Absent a spark like that, the Steelers are not taking the field with the attitude of a team that believes it can win, and that is on Mike Tomlin. Grade: F

Unsung Hero Award
This young player caught a couple of passes, including a key 3rd down conversion, ran a play out of the backfield, and feathered the Ravens with a long enough kick return that they squibbed the next kickoff it to Roosevelt Nix and for that Ryan Switzer wins the Unsung Hero Award for 2018 loss to Baltimore at Heinz Field.