What a difference 35 days makes. On September 30th, the Baltimore Ravens 26 to 14 win over Pittsburgh at Heinz Field on seemed to confirm the worst about the 2018 Steelers:

A different Pittsburgh Steelers team took the field against the Ravens at M&T Stadium to earn a 23-16 victory and sole possession of the AFC North lead. While notching an AFC North road win was important, the key take away from the win over the Ravens is how the Steelers secured victory.

In his press conference, Mike Tomlin pointed to Red Zone performance and the ability to convert third downs as the drivers of the Steelers victory. And Tomlin is right. But the qualities underlying the Steelers success in the Red Zone and on 3rd down are far more important:  Focus, balance and poise. 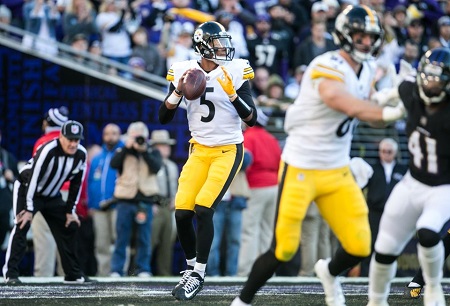 About That Red Zone Differential

The key stats in the game are the Steelers and Ravens respective performances in the Red Zone.

The Steelers first two touchdown passes represented workman like efforts, that culminated in short touchdown passes from Ben Roethlisberger to James Conner and Antonio Brown. The Ravens drives were also reasonably workman like, but they featured some nice runs by Alex Collins.

While it would be incorrect to conclude that Baltimore was imposing its will on the Steelers rushing defense, both field goal drives proved that the Ravens could run on Pittsburgh. But thanks, in no small part, to efforts of Mike Hilton against the pass and then against the run, Baltimore was forced to settle for 3 points both times.

The mathematical difference of is easy to understand, but Pittsburgh’s Red Zone superiority also altered the dynamic of the game as the Steelers would show at beginning of the 2nd half.

Thanks to some stout work by the defense, the Steelers got the ball back with 49 seconds left to go in the 2nd quarter. Instead of mounting one of their patented 1 minute drives, Vance McDonald proceeded to test the collective cardiac health of Steelers Nation with two almost fumbles.

Instead of going into the locker room with extra points, the Steelers clumsy close to the first half opened the door to doubts about their ability stay in control.

Now, down 14 points, Baltimore was forced to abandon its running game and become one dimensional.

For a time, however, it looked like one-dimensional might be enough, as the Joe Flacco led the Ravens an 11 play 75 yard drive that narrowed the difference to 7 in just 3:50 seconds. The Steelers offense followed with a 3 and out and momentum appeared to be shifting to Baltimore as the third quarter ended.

Pittsburgh’s Prevails on Poise and Focus

Keith Butler’s defense responded by forcing a 3 and out of their own as Vince Williams and Bud Dupree teamed to sack Joe Flacco at his own twelve. Yet, the Steelers found themselves in almost exactly the spot on the field, as a penalty on a Ryan Switzer punt return put the Steelers on Baltimore’s 15.

A pair of penalties and an injury to Ben Roethlisberger left the Steelers at 2nd and 20 on Baltimore’s fifteen, leaving Joshua Dobbs standing under center taking his NFL snap.

And that is apparently what Randy Fichtner intended to do. But the young Rocket Scientist turned NFL quarterback saw something he liked in the Ravens alignment, and with the poise worthy of a 10 year veteran, Dobbs checked out of the running play, dropped five yards deep into his own end zone, planted his feet and rifled off a 22 yard dart to JuJu Smith-Schuster.

Two plays later Ben Roethlisberger hit Jesse James, who saw the ball bounced and bobble off his body, but James maintained focus, brought the ball home and moved the Steelers 51 yards down the field. This time the Steelers stalled in the Red Zone, but a Chris Boswell field goal was enough to extend the lead to 7 points.

The Ravens got all the way to the Steelers 19, aided by a Coty Sensabaugh pass interference play, but head up plays by Cam Heyward, Sean Davis and Anthony Chickillo forced Baltimore to settled for 3 again.

The Steelers next drive only saw them go 19 yards, but in converting 2 third downs, Pittsburgh milked over four and a half minutes off of the clock. Baltimore got the ball back with 44 seconds left to play, but a Stephon Tuitt sack of Joe Flacco rendered the rest of the Ravens plays into an academic question.

35 days ago the Steelers 2018 season seemed to be dead in the water. Pittsburgh was 1-2-1, tied for last in the AFC North without a conference victory to their names. Since then the Steelers have authored victories against the Atlanta Falcons, Cincinnati Bengals, Cleveland Browns and now the Baltimore Ravens.

In each of those games, a breakdown on the part of the Steelers allowed their opponents to threaten a comeback with a late score.  But in each instance, Pittsburgh responded with poise instead of panic which has paved their for the Steelers offense and defense to respond with scores and stops of their own.

While you’d like to see your team put opponents away, Pittsburgh’s poise under pressure is a quality that will serve the Steelers well down the stretch.