Steelers receiver Antonio Brown had five receptions for 117 yards and a touchdown in the Steelers dramatic come-from-behind 20-16 win over the Jaguars at TIAA Bank Field on Sunday.

Just another ordinary day for a living legend of a pass-catcher who is considered by many to be the very best in the NFL at his position. In-fact, if we’re being honest, few were even that impressed with No. 84’s day, as he was deemed the “loser” in the one-on-one battle against Jacksonville cornerback Jalen Ramsey–a man who is also considered to be the very best in the league at his position.

Jalen Ramsey certainly frustrated the perennial First-Team All-Pro receiver for most of  the day, limiting him to three receptions on eight targets in-which the two were going head-to-head. 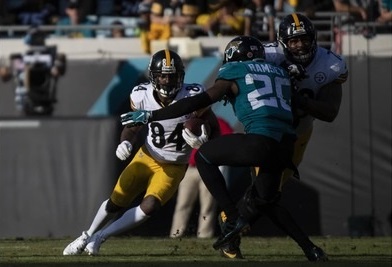 “Losing” seems like such a poor choice of words for a battle in-which Antonio Brown totally schooled Jalen Ramsey at least a few times–including on a double-move early in the game, a play that would have surely gone for a score had quarterback Ben Roethlisberger not been having an almost comically incompetent first half against the Jaguars’ stout pass defense.

However, better throws  would have likely led to touchdowns on both occasions–and this was especially the case on another play in the first half when Antonio Brown was running free down the seam. Yes, it was a great display of instinct and athleticism when Jalen Ramsey undercut the route and intercepted Roethlisberger’s throw before it could reach Brown. But, the fact of the matter is, a more accurate pass would have led to an easy touchdown for No. 84.

The first came at the end of the third quarter, two plays after the Jaguars scored a touchdown to take a seemingly insurmountable 16-0 lead.

But the split-second that the safety jumped up to cover Brown, Antonio Brown instinctively ran by him, down the middle of the field and had nothing but yards and yards of grass surrounding him. Roethlisberger unleashed a bomb that Brown pulled in and took the distance for a 78-yard touchdown that gave Pittsburgh its first points of the day.

Facing a third and 10 from the Jacksonville 27, following a drop by running back James Conner that would likely have given the Steelers the game-winning touchdown, the offense needed to come up with something big, or else have to settle for a long field goal attempt from kicker Chris Boswell, who hasn’t been having one of his better seasons.

Fear-not, because despite being covered by Jalen Ramsey, Antonio Brown pulled in a critical pass from Roethlisberger, and not only secured a first down, picked up 25 yards down to the Jaguars’ two-yard line, setting up No. 7’s one-yard dive into the end zone with five second remaining in the game.

In his first season with Randy Fichtner as his offensive coordinator, Anotnio Brown has 11 touchdowns–including at least one in his past eight games–and is well on his way to smashing his career high of 13. Furthermore, Antoino Brown has continued to have the clutch gene, as Sunday’s heroics, along with his game-winning score against the Bengals, have clearly illustrated.

Let’s face it, teams aren’t going to allow Antonio Brown to dominate statistically this season like he has so many times in the past. And when all is said and done, he might not be anywhere near the league leaders in receptions or yards.

But while Antonio Brown’s statistics have slipped a bit in 2018, his status as the very best wide receiver in the NFL has not.