So the Steelers offense, defense and special teams each authored dramatic Splash Plays that, on one level, had a decisive impact on the outcome. But viewed from another angle, the Steelers performance revealed a bit of a different truth about football: For Splash Plays to be decisive, they must be backed by sound fundamental football. 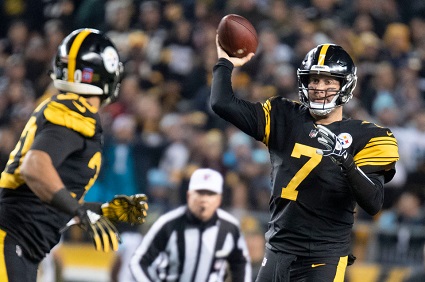 A lot of good quotes surfaced after the game, but perhaps the best came from Panthers tight end Greg Olsen: “Yeah, we got the ball at the jump, right down the field, scored. Two plays later, we’re down 14-7.”

Going into the game stopping Carolina’s high-octane offense was paramount. And the Panthers opened with a 6 play 75 yard drive that featured a lot of Christian McCaffrey and Cam Newton, with Pittsburgh looking powerless to slow, let alone stop the duo.

But when two Carolina corners collided on what was to be a short pass to James Washington, Ben Roethlisberger hurled a bomb to JuJu Smith-Schuster who took it to the house.

They fared a little better with a tie, to the tune of 0:13 seconds, as T.J. Watt wrapped Cam Newton in the end zone. Newton, like Roethlisberger is tough to bring down, and he resisted long enough to save a safety by tossing the ball away, but he didn’t intend hitting Vince Williams, who took the interception to the house giving the Steelers a 14-7 lead.

However, when asked if that was the decisive sequence of the game, Mike Tomlin balked:

…we’ve seen that so many times. There is too much ball after that to think that is the defining moment. It’s not. It was a great moment but whether it was positive or negative the games are never defined by plays that occur that early.

And Mike Tomlin is right. A big play’s impact only reverberates through the end result of the game if you follow solid fundamental football, which is indeed what the Steelers delivered in the game’s remaining forty nine minutes and 55 seconds of play.

Next Six Series Prove to be Decisive for Pittsburgh

While the plays perhaps don’t provide much in the way of ESPN highlight material, its entirely possible that the series following Vince Williams’ Pick Six was the most important of the night.

Carolina did indeed cut the Steelers advantage to 10 on another Christian McCafferty touchdown, but it took Ben Roethlisberger and Antonio Brown less than 2 minutes to put the Steelers back up by 17 when the duo hooked up on a 53 yard touchdown play.

2nd Half: Anatomy of a Rout

This one saw the Steelers convert 3 third downs, and burn more than 6 minutes off of the clock, as Vance McDonald pulled down a touchdown to put the Steelers up 38 to 14. 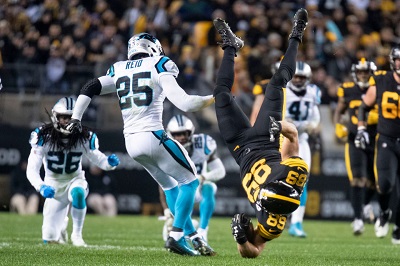 Carolina started the first half soundly, as Christian McCafferty got 5 yards on his opening carry. However, Bud Dupree sacked Cam Newton for an 11 yard loss on the next play, and Carolina’s first drive ended in a punt. The rout was on.

Mike Tomlin went into the game planning to play every player with a helmet, and every player had a piece of the victory.

Joshua Dobbs did lose the perfect passer rating he’d taken out of the Ravens game, but that is a small price to pay for seeing your 2nd string quarterback come out for clean up duty in the 4th quarter.

While the win over the Panthers was truly a team effort, any analysis must acknowledge the exceptional play by Ben Roethlisberger, who en route a perfect passer rating game managed to convert third downs at will, while throwing 5 touchdown passes to 5 different players.

Tomlin’s Challenge Coming out of the Carolina Game

As noted in our Report Card, the last time the Steelers played at night in Heinz Field it appeared to be lights out for Pittsburgh. On Thursday Night Football, the Steelers dominated a hot team and one that is a legitimate NFC contender.

The progress is unquestionably positive, but Mike Tomlin’s challenge is to ensure that the Steelers performance against the Panthers doesn’t represent Pittsburgh’s peak. Fortunately, Mike Tomlin appears to understand that as he explained:

Really big performance against versus a really good team on a short week so there is a lot to be proud of, but we are probably not that good. You get games like that sometimes. The ball gets rolling down hill, we are appreciative of it.

If Mike Tomlin can get his team to internalize that attitude, then the Steelers stand a strong chance of gaining a measure of revenge against the Jaguars next Sunday in Jacksonville.