The Pittsburgh Steelers rebounded for dramatic 20-16 comeback victory over the Jaguars at Jacksonville’s at TIAA Bank Field.

In doing so, the men in Black and Gold extended their winning streak to 6 games, secured a conference win, and perhaps doomed the post-season chances of a re-emerging rival.

But Mike Tomlin’s Steelers also affirmed another, more important truth behind the game: Victory comes to those who play for 60 minutes. 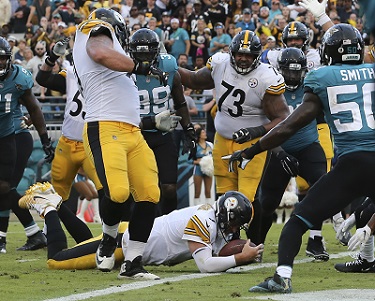 The Jacksonville Jaguars had bested the Steelers twice last year by employing a simple formula:

All week, the question on everyone’s minds was, “Can the Jaguars pull it off a third straight time?”

For a while, it looked like they might. Ben Roethlisberger played terribly for the vast majority of the game, and was particularly ineffective in the first half. Four of Pittsburgh’s 1st half possessions a ended in Jordan Berry punts. Ben Roethlisberger’s interceptions ended two others.

That worked, for a while, but as the first half wore on, Forunette and Carlos Hyde started ripping off double digit runs and it was Déjà vu all over again for the Steelers defense.

The Jaguars advanced relatively deep into Pittsburgh territory 3 times in the first half, but each time the Steelers defense steeled up and refused to allow touchdowns. Bud Dupree and L.J. Fort came up with big stops, and Javon Hargrave sacked Blake Bortles on third down.

So instead of being down 21-0, the Steelers defense kept the difference to 9 going into the half.

Running the ball might be out of fashion in today’s NFL, and that’s a shame, because something special happens when a team rushes the ball successfully.

And “Imposing their will” has been a key ingredient to the Steelers success in this second Super Bowl era, whether that involved pounding the ball with Jerome Bettis, Willie Parker, Rashard Mendenhall, Le’Veon Bell or James Conner.

And to be sure Fournette got 8 yards on his first two carries, but a penalty pushed the Jaguars back, and then T.J. Watt ended the first drive with a strip sack of Blake Brotles.

But it looked like that stop might be just a footnote in the box score, as the Jaguars took advantage of another Roethlisberger interception by ramming the ball down the Steelers throats on an 80 yard touchdown drive.

That put the Jaguars up 16-0 and, on a day when its offense could do nothing right, it appeared to be the dagger in the Steelers heart. Ironically, it was the turning point of the game.

Steelers Defense Energized Instead of Eroded

It took only two plays for Ben Roethlisberger to hit Antonio Brown for a 78 touchdown to put the Steelers on the board. And, for all the credit the Steelers offense would earn for the fourth quarter comeback, the Steelers defense were perhaps the real stars of the rebound. As Steelers Wire founder Neal Coolong explains:

After Fournette's touchdown to go up 16-0, the #Jaguars ran 13 plays for -3 yards and a lost fumble (final play ruled a fumble and #Steelers recovery).

The Steelers offense stalled after the Roethlisberger to Brown strike, failing on the 2 point conversion and then punting and turning over on downs on its next two drives. It wasn’t an issue, because instead of eroding the will of the Steelers defense, Leonard Fournette’s 1st half energized Keith Butler’s boys into 2nd half shut down mode:

Then the Steelers offense finally came alive, as Ben Roethlisberger hit Antonio Brown, James Conner and JuJu Smith-Schuster to move down the field, setting up Vance McDonald to make another tough touchdown catch. 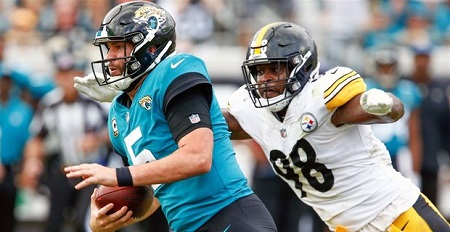 The Jaguars got the ball back. Everyone in the stadium knew they were going to run, and everyone knew Fournette was going to run it.

The Steelers got the ball back with 1:42 left and one time out. A picture perfect fade pass to JuJu Smith-Schuster got the Steelers well into Chris Boswell field goal range, but Mike Tomlin opted to go for the win. Another 25 yard pass to Antonio Brown got the Steelers to the two.

It would take the Steelers 4 tries, but Ben Roethlisberger ran it in with 5 seconds left to go. For good measure, T.J. Watt strip-sacked Blake Bortles again to seal the Steelers win.

Lessons Learned, Lessons to Live By

Steelers fans, and probably the Steelers players themselves undoubtedly wanted a dominating revenge win over the Jaguars. With a last second win, Pittsburgh failed to deliver. But the Steelers leave Jacksonville with a W, and they learned some important lessons in the process.

The Steelers defense is capable of going toe-to-toe with an elite NFL rusher and adjusting along the way as Christopher Carter’s stats highlight:

Steelers defense stepped up against Leonard Fournette today. Great second half adjustments by the team.

They kept the Steelers in it all game.

The Steelers also showed they’re capable of winning a game even when Ben Roethlisberger is not at his best – at least for most of the afternoon. But perhaps most importantly, the this group of Pittsburgh Steelers demonstrated that they have the discipline, the attitude and the resilience to fight to the very last minute.

And against the Jaguars, that made all the difference.