Taken from the grade book of a teacher who is proud of his pupils for working every last second until the bell rings, here is the Pittsburgh Steelers Report Card for the win over the Jaguars at TIAA Bank Field in Jacksonville.

Running Backs
James Conner found it to be rough sledding in a week when he officially inherited the Steelers starting running back role from Le’Veon Bell. James Conners only managed 25 yards on 9 carries, and while he did make 6 catches, he dropped a clear game winner late in the game. Grade: D

Tight Ends
Vance McDonald was clearly out of synch with Ben Roethlisberger early in the game, however for the 2nd week in a row, McDonald found away to come down with another tough touchdown catch. Xavier Grimble had 1 catch for 3 yards. Grade: B

Wide Receivers
Antonio Brown’s target’s to catch ratio this week won’t help his Pro Football Focus raiting, but many of those passes were badly overthrown. As it was Antonio Brown’s touchdown, and his 25 yard reception that got the Steelers to the 2 were game changers. However, JuJu Smith-Schuster’s catches had equal, if not greater impact. On both touchdown drives JuJu Smith-Schuster made tough catches that put the Steelers into scoring position. James Washington had one catch, but Ryan Switzer seems to have a bigger role in this offense at this point. Grade: A

Offensive Line
The Jacksonville Jaguars have one of the better defenses in the league and are led by a group of solid pass rushers. The Steelers offensive line in many respects struggled against the Jaguars, as they failed to open holes for James Conner and Ben Roethlisberger faced much more pressure than normal. Grade: B-

Defensive Line
Tyson Alualu actually led the unit with 7 tackles, while Cam Heyward had the look of a one-man wrecking crew in the second half, blowing up the line for 2 tackles for a loss, 1 quarterback hit and a sack. The Steelers defense shut down the Jaguars offense in the last 20 minutes of the game, and its started up front. Grade: B 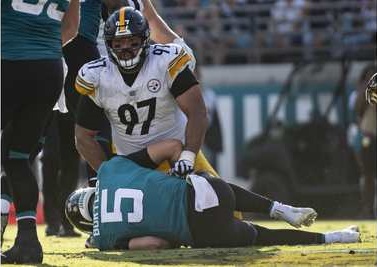 Linebackers
Vince Williams led the team in tackles, defensed a pass, had a tackle for a loss, a QB hit and registered a sack, playing like a one-man wrecking crew. T.J. Watt was close behind him, notching two sacks, dropping a ball carrier behind the line of scrimmage and hitting Blake Bortles twice. Jon Bostic had another solid game, as did Bud Dupree while L.J. Fort delivered in spot duty. Grade: B

Secondary
Sean Davis continues to keep the lid of opposing offenses and limited a Leonard Fournette to simply reaching the second level as opposed to exploiting it. Coty Sensabaugh had another strong game with 7 tackles. Terrell Edmunds also quietly had a good day as did Joe Haden. Blake Bortles was 10 of 18 for 104 yards and Jacksonville lost -3 yards on its last 5 possessions, when all it needed was a first down. Grade: A.

Special Teams
Chris Boswell went 3-3 on extra points, while Jordan Berry boomed off several long punts on a day when the Steelers needed to pin the Jaguars deep. Ryan Switzer looked solid as a return man, although the Jaguars did have some reasonable success returning punts. Grade: B-

Coaching
Randy Fichtner went up against one of the NFL’s best defenses, and while the Jaguars clearly tested the Steelers, Fichtner’s offense came up with 3 touchdowns in 16 minutes. Beyond that, the early struggles appeared to be more tied to issues of execution rather than game planning.

To be sure, the Steelers weren’t shutting down the Greatest Show on Turf or the Jimmy Johnson’s Dallas Cowboys of  ‘90’s, or the New Orleans Saints of 2018, but limiting any offense in this day and age to negative yards for a quarter and a half when the only thing the offense needs for victory is a handful of third downs is impressive.

Early in the 2nd half, instead of declining a penalty that would have brought up 4th 1, Tomlin accepted it and his defense responded with a strip sack that forced the Jaguars to punt from their end zone. Later, Mike Tomlin managed his timeouts so that his offense had one to for the final drive.

And when the Steelers got into scoring range, Mike Tomlin didn’t hesitate in going for the win instead of the tie. Grade: A

Unsung Hero Award
After the game Mike Tomlin swore that the Steelers hadn’t made any adjustments.

Yet the educated eye could see that the Steelers had made one key change. Daniel McCullers’ Number 93 was not often seen in the second half. Instead, it was replaced by Javon Hargrave’s number 79, who in addition to helping completely shutdown the run, also managed two sacks, two more quarterback hits and defensed a pass and for that Javon Hargrave wins the Unsung Hero Award for the Steelers win over the Jaguars.