Every week James Conner seems to push LeVeon Bell’s holdout further and further into irrelevancy. And so he should. With the season half over, not only does no one in Pittsburgh miss Le’Veon Bell, but James Conner is arguably Steelers offensive MVP.

So it is hardly a surprise that Le’Veon Bell’s “Fairwell Miami” tweet which again tantalized an end to his holdout barely moved the needle in Steelers Nation, save for the mandatory regurgitation from the content aggregation sites. 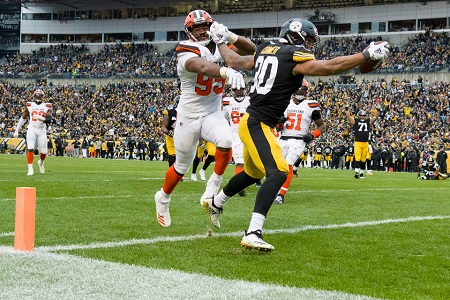 But no matter how fed up Steelers fans are (and should) be with Bell’s antics, Steelers Nation would be wise to welcome Le’Veon Bell back should he “volunteer” to return to the South Side next week.

If you’re a true Steelers fan, a “Three Yards and a Cloud of Dust” purist there’s no way you can watch James Conner’s bruising rushing style and not feel a surge in your Black and Gold blood pressure.

Well per Jim Wexell’s reporting on Pittsburgh 247, in the Steelers win over the Bengals at Paul Brown Stadium, James Conner ran so hard he knocked both linebacker Nick Vigil and strong safety Shawn Williams out of the game.

While no true fan of the game ever roots for another player to get injured (well, maybe except for Vontaze Burfict) Steelers fans like tough running backs who rush hard and dish out as much or more than they take.

If pressed to tell the truth, Steelers fans from Generation X and above would probably confess to being just as upset that the ’94 AFC Championship loss robbed them of a chance to see Barry Foster run full speed at Deion Sanders as they were at losing a shot at One For the Thumb.

The man who once boasted about accelerating before getting tackled, just so that he could inflict a little more pain on the defenders. Barry Foster, the man whose body fell apart and was out of football 2 years after that record setting 1992 season.

OK. Maturity and motivation issues were as a big a factors as durability in the rapid end to Barry Foster’s career, but Foster missed significant time to injury in ’91, ’93 and ’94.

And the cost is the increased risk of injury. As mentioned here back in August, during the Tomlin era the Steelers have rarely reached the playoffs with both RB Number 1 and RB Number 2 healthy. (Kinda makes you understand a little bit better why Franco Harris ran out of bounds instead of taking a hit.)

From a pure business perspective, Le’Veon Bell has more to lose than to gain by showing up. But let’s fancy the idea that a chance to win a Super Bowl does interest Le’Veon Bell enough to play out the final 7 games of the 2018 season.

If he does then he certainly must take a back seat to James Conners, but Le’Veon Bell would provide exceptional depth and insurance against injury that neither Stevan Ridley nor Jaylen Samuels could provide.