“We have some lessons to learn.”
–Mike Tomlin following the Steelers come from behind win over the Jacksonville Jaguars

To say the least, Over the last two seasons the Pittsburgh Steelers have developed a flair for the dramatic. Dramatic in the form of Ben Roethlisberger 4th quarter, or perhaps more accurately, two minute warning comebacks.

It took the Steelers 4 attempts from the two yard line to score the go ahead touchdown in a game that Pittsburgh never led until the final five seconds of the game arrived. 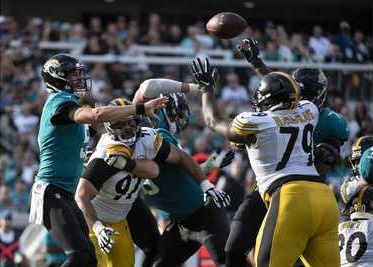 The truth is that the inability of Ben Roethlisberger to get in sync with Antonio Brown, JuJu Smith-Schuster and Vance McDonald and the inability of the offensive line to get rushing lanes open for James Conner is the biggest reason why such late heroics were again needed.

But, and few could have imagined saying this in September, the Steelers have a good defense too, and one that could be better by finding a way to give more playing time to Javon Hargrave.

The Steelers of course drafted Javon Hargrave in the 3rd round of the 2016 NFL Draft, the third defensive pick after taking Artie Burns and Sean Davis. Hargrave quickly assumed Steve McLendon’s starting role and his play in the 2nd half of 2016 was a big reason for the team’s turn around.

So be it. In many ways sub packages define Mike Tomlin and Keith Butler’s defense and far be it for me to criticize them.

But regardless of which subpackage they deploy, the Steelers coaches need to find a way to get Javon Hargrave on the field more. During the first half it looked like Leonard Fournette was going to lead the Jaguars on steamroll the Steelers defense similar to what they had done in the playoffs.

But Javon Hargrave arguably began the defensive rally by sacking Blake Bortles on third down to force a field goal when the Jaguars were in the Red Zone. He followed it up with another sack on the next series helped get the ball back (although the Steelers would turn it over quickly.)

While snap counts by quarter are not available, it seemed like early in the game there was a lot of Daniel McCullers Number 93 on the field and a lot less of Javon Hargrave. However, in the second half Hargrave 79 was on the field a plenty, which is when the Steelers defense went into shut down mode.

Cam Heyward leads all Steelers defensive lineman having been on the field for 78% of the Steelers defensive snaps. He’s followed by Stephon Tuitt who clocks in at 68%. Javon Hargrave is next, at 38%, meaning his snap count is only 7% higher than Tyson Alualu.

When he first arrived in Pittsburgh and speculation still abounded that he might shift the Steelers to a 3-4 defense, Mike Tomlin explained that a players like Aaron Smith or Casey Hampton were going to be good whether they played in a 3-4 or 4-3 scheme.

Tomlin’s logic was sound, even if it trying to apply to every good player would be an oversimplification (see the Steelers moving “bust” 1st rounder James Farrior from the outside to inside linebacker.)

Well, Javon Hargrave might officially carry the title of nose tackle, but he’s shown he can be an impact player, and it would wise for Karl Dunbar, Keith Butler and Mike Tomlin to figure out how to get him on the field more frequently.