To echo head coach Mike Tomlin’s post-game press conference after Pittsburgh’s 52-21 victory over the Panthers at Heinz Field on Thursday, no, the Steelers aren’t that good.

No team is that dominant. No team’s offense is so good that it keeps its punter off the field until the fourth quarter–and even then, it was only because the franchise quarterback exited with a 38-point lead.

But while Pittsburgh’s mashing of the Panthers wasn’t a performance we should come to expect week in and week out, it certainly showed what the team is capable of when clicking on all cylinders. 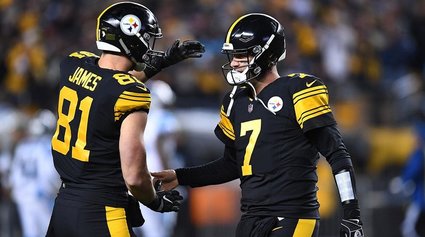 No, the Steelers won’t dominate like that every week — it’s the NFL, after all — but that doesn’t mean they haven’t been consistently impressive for the majority of this now five-game winning-streak. Even if you strike Thursday’s historic performance from the record — it was the most points the team had scored in a game since 1984 — the Steelers’ average margin of victory over the previous four games was 13.25 –or nearly two touchdowns.

Some have complained about Pittsburgh’s history of starting off slow. However, based on actual facts, that’s simply not true. Starts of 2-1 are more common for Tomlin’s teams than the 1-2-1 beginning to this season. The only common denominator, perhaps, is the quality of football his teams have displayed in September.

In previous years, the Steelers were able to survive the rust that was built up by the low reps — or even no reps –accumulated by the likes of Antonio Brown, Le’Veon Bell, Maurkice Pouncey and Cam Heyward during the preseason. This year, they were not able to survive that. In-fact, they looked so bad and disjointed during the first month of the season, many — including yours truly — wondered if they were even a good football team, let alone one capable of competing with the best the AFC had to offer.

Actually, Pittsburgh still has a ways to go if it wants to match the nine-game streak of two years ago and the eight-game streak from last season.

Lulls happen to most football teams during the course of a season–the Steelers lost four games in a row in the heart of the 2016 campaign. But when these lulls, these struggles, occur right out of the gate, you wonder if it’s the new reality.

But another thing about Tomlin is he’s very aware that the end of the preseason and the beginning of the regular season doesn’t end the process of finding out who your football team is. The Steelers began the regular season without Bell, a player they, like everyone else, assumed would show up for Week 1.

As you know, Le’Veon Bell had been a vital cog in the Steelers’ offensive machine, dating back to the 2013 season. For him to not be there for the first game had to be a huge curve ball to Randy Fichtner, the new offensive coordinator, as well as the entire Steeler program and way of doing things.

How could the unexpected absence of perhaps your most important skill position player not take a while to recover from?

Speaking of adapting, Roethlisberger had to get used to relying on receivers not named Antonio Brown; this took some time early on, hence the frustration Brown often exhibited on the football field.  But opposing defenses weren’t going to stop double and triple-teaming Brown (they still haven’t), which meant Ben Roethlisberger had to start trusting his other targets.

Regarding offensive cogs, you might say James Conner, the second-year backup running back suddenly thrust into a starting role in Week 1, has morphed into that very thing. With 1,158 yards from scrimmage and 11 touchdowns through nine games, James Conner is every bit the dual-threat running back Bell ever was–and then some.

On the defensive front, Keith Butler had to get used to two new safeties in Sean Davis (he made the switch from strong to free) and Morgan Burnett, the veteran free agent acquisition. Burnett came to Pittsburgh last spring with the expectation that he’d be a vital moving piece in the Steelers’ secondary, someone who could fill many roles in the team’s multiple sub packages. Burnett missed a chunk of time at the beginning of the season and had to be replaced in the lineup by Terrell Edmunds, the first round pick who was clearly taken out of the oven before he was fully cooked.

Sure, the unexpected playing-time will likely benefit Terrell Edmunds in the future — maybe even the present–but that doesn’t mean the early returns weren’t going to be rough.

However, Jon Bostic, Burnett’s fellow free agent acquisition at the inside linebacker spot, has slowly and quietly helped right the Steelers’ defensive ship, providing a veteran presence for a unit that clearly needed it at the tail-end of 2017 when Shazier was lost for the season with his horrific injury.

Back to 2018, and the Steelers current ascension from struggling has-been whose window had closed to dominant contender whose window is still very much open.

The Steelers are who we thought they were all along–a Super Bowl contender–it just took a while for them to figure some things out.

It appears they have.