Taken from the grade book of a teacher who is frustrated at watching his students flunk assignments because they’re forgetting to do things like put their names on their papers, here is the Steelers Report Card for the 2018 loss to Denver at Mile High Stadium. 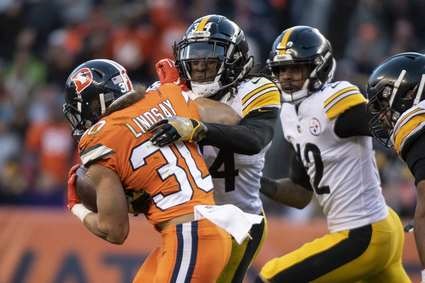 Quarterback
Ben Roethlisberger had his moments, including and impressive streak of consecutive pass completions , and hitting long touchdown pass from his own end zone. He also executed a game plan that forced him to be disciplined in getting the ball out quickly. But Ben Roethlisberger threw two interceptions. The first came got the Broncos back into the game on a drive when a touchdown very well may have sealed the outcome. The second came when the Steelers needed to score. Grade: D

Running Back
James Conner didn’t get a lot of opportunities to run the ball, but behind Roosevelt Nix’s blocking Conner looked like he might be able to put the game on ice had to coaches chosen to go that route. He also caught 4 passes on 4 targets. Nonetheless, James Conners fumbled at a critical moment which set up Denver’s go ahead touchdown. Ball security is becoming an issue for James Conners. Grade: D

Tight Ends
Jesse James had his number called 4 times and each time he delivered. Vance McDonald also had 3 catches on a day when a short passing game reigned supreme. Xavier Grimble had what should have been an excellent 23 yard run turn into a turnover instead of a touchdown in large part because he didn’t secure the ball properly. Grade: D

Wide Receivers
There was good and bad here. JuJu Smith-Schuster’s 97 yard touchdown should have been a game breaker. However, JuJu missed an earlier deep pass. Antonio Brown made one excellent toe-tapping catch only to miss another one which was more necessary. Ryan Switzer proved himself to be a valuable underneath target and showed he can take a hit. With Eli Rogers beginning to practice, James Washington needs prove he deserves a roster spot. Grade: C

Offensive Line
Denver has a fierce pass rush, yet Ben Roethlisberger was only sacked twice and neither were game-changing plays. The Steelers run blocking looked to be good enough, but honestly establishing the running game was never an priority of the coaching staff. Grade: B

Defensive Line
Javon Hargrave and Cam Heyward’s sack of Case Keenum could have been a game turning play, and the duo’s numbers in terms of tackles for losses and QB hits show that they were aggressive. Still, the Steelers defensive line misses Stephon Tuitt, and if Phillip Lindsay 7.9 rushing average isn’t on the defensive line, it starts with them. Grade: B-

Linebackers
Vince Williams had a sack but it was L.J. Fort who actually tied Jon Bostic for the lead in tackles, but a blown Bostic coverage allowed Denver to make their first advanced into the Red Zone. T.J. Watt had one tackle. The stat sheet shows that Philip Lindsay had a lot of 2 yard runs. He also had two 8 yard runs, a 9, a 12, a 14, an 18 and a 32 yard run. A lot of that’s on the linebackers. Grade: D

Secondary
Terrell Edmunds showed off his athleticism by running down Philip Lindsay on a couple of long runs, which is good but in at least one of those cases Edmunds was compensating for a bad angle on the part of Sean Davis. Joe Haden had one of his most difficult days as a Steeler, giving up a long pass to Matt LaCosse and getting burned by Emmanuel Sanders. Mike Hilton’s trade mark has been timing blitzes perfectly, but he got flagged for a neutral zone infraction. Grade: D 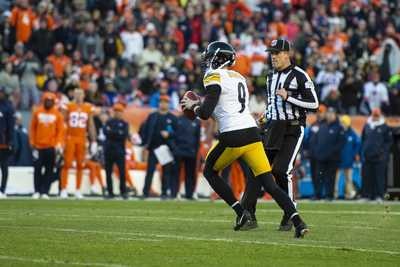 Special Teams
The return games were non-elements for both teams. Jordan Berry had a sound day kicking and Chis Boswell made all of his kicks – save for the one that got blocked, which is inexcusiable given Denver’s tape on that front.

On the flip side, the Chris Boswell to Alejandro Villanueva field goal was the first successful fake field goal in memory for the Steelers and the Steelers special teams effectively added made up for their earlier error. Grade: C

Coaching
Not that he, or more importantly Art Rooney II pay much attention, but Steelers coaches haven’t felt much social media heat during their five game winning streak. That ended with the loss to the Broncos.

On offense it is easy to second guess Randy Fichtner’s short-passing game plan, but the truth is that he kept Ben Roethlisberger clean, the Steelers moved the chains and led in time of possession. None of that mattered much thanks to two end zone turnovers.

While the defense didn’t revert to its September form, it gave up several long plays and struggled against the run. Moreover, as Mike Tomlin indicated in his press conference, the Steelers defense could have altered the dynamic with a turnover, but none was forth coming.

Individual turnovers are never a coach’s fault, ball security is becoming an issue with a few of the offense’s key players and Mike Tomlin needs to see if this can be addressed systemically. This loss is hardly devastating, but Mike Tomlin must ensure that a snowball effect does not ensue. Grade: C

Unsung Hero Award
Von Miller is easily the NFL’s most dynamic defensive player today. He’s got a Troy Polamaluesqe ability to make game-changing plays at critical moments. Being asked to start your first game against him cannot be easily. But that’s what the Steelers asked Chukwuma Okorafor to do, Okorafor delivered and for that he win the Unsung Hero Award for the Steelers latest loss to the Broncos at Mile High.