Taken from the grade book of a teacher who is breaking protocol by issuing his grades before his analysis, here is the Pittsburgh Steelers Report Card for the 52-21 win over the Carolina Panthers. 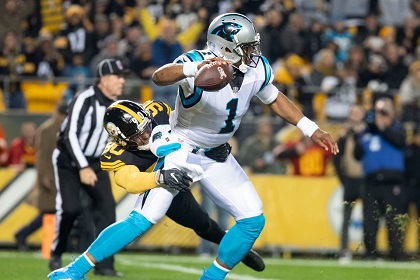 Quarterback
Ben Roethlisberger posted a perfect quarterback rating, by going 22 of 25 for 328 and five touchdown passes. Ben Roethlisberger did it all, long passes, short passes third down conversions and everything in between. Joshua Dobbs was 1 for 2 in mop up duty. Grade: A+

Running Backs
James Conner didn’t break the 100 yard mark, but the Steelers didn’t need him to. As it was, he average 5 yards a carry and added another touchdown. Stevan Ridley saw his most extensive non-garbage time action and managed 26 yards, while Jaylen Samuels only got 7 yards on the ground, but did score a touchdown through the air. Roosevelt Nix caught 2 passes for 17 yards. Grade: A

Tight Ends
Jesse James takes heat for his blocking, but he delivered a critical block on Conner’s touchdown run, and scored a late touchdown of his own. Vance McDonald made another tough catch in the end zone and caught 3 other passes. Grade: A

Wide Receivers
Antonio Brown and JuJu Smith-Schuster both scored on long touchdown bombs but both men also made other clutch catches. Ryan Switzer came up with two drive-sustaining catches while Darrius Heyward-Bey nabbed his first catch of the season. Grade: A

Offensive Line
Ben Roethlisberger was only hit twice and sacked only once. For most of the night, Ben had time to write his dairy in the pocket. The Steelers weren’t quite as effective running the ball as they have been, but they didn’t need to be.

The play of the Steelers offensive line is nothing short of incredible, and David DeCastro and Maurkice Pouncey’s defense of Ben Roethlisberger after Eric Reid’s hit shows just how seriously this unit takes its job.. Grade: A+

Defensive Line
Javon Hargrave actually led the defensive line in tackles, as the Steelers remained in their base defense extensively. The real leader of the unit was Cam Heyward, who exploded for 2 sacks, dropped two runners behind the line of scrimmage and made two other hits on Cam Newton. Stephon Tuitt had two tackles. Grade: A

Linebackers
Jon Bostic led the team in tackles and arguably should have gotten ½ of a sack. Vince Williams had a banner night, bringing home a pick six and registering a sack. Bud Dupree continues to be a disruptive force in the backfield, as he recorded another sack and had two more tackles for losses. L.J. Fort spot duty stint was enough to earn him a tackle for a loss. Grade: A 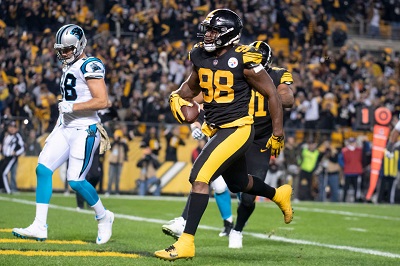 Secondary
The Steelers secondary didn’t produce a lot of “Splash Plays” other than Terrell Edmunds almost interception. However, Carolina was a dreadful 4-11 on third downs and the Steelers front seven only registers 5 sacks if receivers are covered. Coty Sensabaugh appears to be settling in as a competent corner while Joe Haden has been invisible – in a positive sense. Morgan Burnett, Sean Davis and Mike Hilton all had strong nights. Grade: A

Special Teams
Chris Boswell was 5 for 5 on extra points, and made a 50 yarder into the open end of Heinz Field. Ryan Switzer had one nice punt return and, for the first time in recent memory, neither the Steelers coverage nor return units gave up a penalty.

The Steelers were already up 45 to 14 at that point, but it was a heads up play by both men, and it symbolized the entire night for the Steelers. Grade: A

Coaching
The last time the Steelers played at night, it looked to be lights out in Pittsburgh, but the win over the Panthers illustrated the dramatic difference the team has experienced since then. 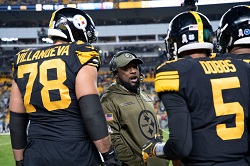 Under Randy Fichtner, the Steelers offense is firing on all cylinders in ways it never did under Todd Haley. The Steelers offense was multi-faceted against the Panthers, burning Carolina for long touchdowns, converting third downs, orchestrating long, clock-consuming drives all while mounting a balanced attack.

The Steelers defense was also excellent. Perhaps had, the game evolved differently, the Panthers rushing success could have been the defense’s undoing. But that is an academic question, because Keith Butler‘s boys limited the long ball and harassed Cam Newton through the night.

Mike Tomlin deserves credit for preparing his team on a short week and for making an effort to keep everyone fresh throughout the game. As Tomlin conceded, the difference between the Steelers and the Panthers probably isn’t as dramatic as the score board would suggest, but they dominated Carolina in all three phases. Grade: A

Unsung Hero Award
There is no shortage of candidates for this award but we’ll focus on one whose stat line says he ‘only” made one tackle. One tackle, behind the line of scrimmage. This player corralled and wrapped up Cam Newton in the end zone, which forced a pick six. Later this player clobbered Cam Newton in a strip sack with a hit that shook up Carolina’s signal caller, and for that T.J. Watt wins the Unsung Hero Award for the win over the Panthers at Heinz Field.