The “Watch Tower’s” lights have been out for a while as material has abounded but time has been in short supply. However a recent player-pundit spat prompts us this special edition. 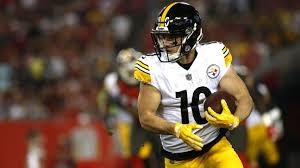 Ryan Switzer in the Steelers win over Tampa Bay

The Inherent Tension Between Journalists and Athletes

An inherent tension defies the relationship between sports journalists and the athletes they cover. Journalists, unlike us bloggers, job depends on getting athletes to talk to them. But by the same token, a journalist’s credibility with his or her readers depends on them writing objectively about those athletes.

Usually these tensions remain below the surface, although writers like Jim Wexell frequently share insights into how easy or difficult it is to talk various players. Sometimes the public gets wind of these tensions.

Greg Lloyd stopped talking with much of the local media in the mid-1990’s, and John Stiegerwald even described how Greg Lloyd once physically shoved him out of the way while he was trying to interview another player. If memory serves, Rod Woodson barred reports from the Tribune-Review from a press conference when he announced he was leaving Pittsburgh.

More recently Ben Roethlisberger blew off an interview with reporters who overheard him explain “I ain’t gonna win no Rooney award anyway.” (The post-Midgeville Roethlisberger did in fact win The Chief Award a year later.) And just last summer Antonio Brown blasted Ed Bouchette over an injury report.

But if tension is natural, it doesn’t mean that it can’t be resolved, as Ryan Switzer and 93.7 The Fan’s Colin Dunlap demonstrate.

If you’re reading this you know that the Steelers 20-16 win over the Jaguars came down to a hectic and heroic goal line situation set up a James Conner drop and by several Ben Roethlisberger JuJu Smith-Schuster hookups.

So the plan was to throw to Switzer? Yikes.

Clearly I must have done something to upset this dude. lol c’mon man there’s no need to be a keyboard warrior. https://t.co/ai73K1jxa9

However, rather than given into the corrosive nature of bad blood, Colin Dunlap and Ryan Switzer decided to do something constructive:

Talking about sports is what I do. Sometimes that involves criticism. It’s my goal to never make it personal. @Switz felt I did, I felt I didn’t. It bothers me and demands olive branch.
That said, for every catch he has rest of season I’ll donate $20 to his charity($500 min).

In response, Ryan Switzer pledged to donate $40-per-catch to UPMC Children’s Hematology/Oncology Department for the rest of the season.

The two opened their challenge to the public and are inviting everyone to join in which they can do via the Pittsburgh Children’s hospital page. Their orginal goal was to raise $5000 dollars, but as of 4:00 pm Eastern on Saturday November 24th it appears they’ve raised over $10,000 already, with team mate T.J. Watt donating $1000 dollars.

While this won’t be the last time a journalist butt’s heads with one of the Pittsburgh Steelers, in this time of tension and violence both Ryan Switzer and Colin Dunlap win Watch Tower Kudos for finding a way to transform conflict into an opportunity to raise money for UPMC Children’s Hematology/Oncology Department.

Click here to donate to the The Ryan Switzer Reception Challenge.