On November 13, 2016, the Steelers lost a last-second heartbreaker to the Cowboys at Heinz Field. The loss was not only heartbreaking, it appeared to be backbreaking, as it left the team at 4-5 and without its defensive leader–defensive end Cam Heyward was lost for the rest of season with a pectoral injury.

It was Pittsburgh’s fourth-straight defeat, one that had many wondering if the services of head coach Mike Tomlin should be retained beyond the 2016 campaign.

But if you’ve been paying attention, you know that period in team history was the darkness before the dawn. 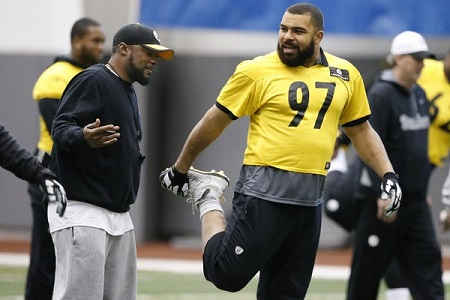 Mike Tomlin and Cam Heyward on the South Side. Photo Credit: PennLive.come

That loss to Dallas sparked an unexpected turnaround that saw the Steelers win their final seven regular season game to clinch the AFC North. They won two more games in the postseason to advance all the way to the AFC Championship Game against, who else? The Patriots at, where else? Gillette Stadium.

The Steelers nine-game winning-streak came to a resounding halt that afternoon amid a 36-17 defeat that, afterward, had everyone questioning the team’s game-plan and ability to adapt.

Unfortunately, the Steelers were unable to get over the hump again in 2017 and even bowed out of the playoffs a week earlier–a 45-42 loss to the Jaguars in the divisional round.

Despite finishing with a 13-3 regular season record, many again wondered if Mike Tomlin was the man to lead the Steelers organization on the field moving forward. In fact, there were rumors that Pittsburgh’s minority owners were going to demand the 11-year head coach be relieved of his duties after the loss to Jacksonville.

Preposterous? Ridiculous? Idiotic? An overreaction? No doubt all of those things, but those minority owners–if the rumors were indeed true–were reacting no differently than many other people–including the media and the fans–regarding the state of the Pittsburgh Steelers.

Winning championships is all the Steelers and their fans are about. It’s expected. It’s demanded. Therefore, when the organization goes a decade without its next Lombardi trophy, people are going to want to get their pound of flesh.

It’s bad enough to not get the job done on the football field, but when it’s believed that one of the reasons is because the head coach has no control over his players off the field, that emboldens folks even more to want change, to demand that heads–especially the one belonging to the head coach–roll.

2017 was perceived by many as an ongoing distraction, with the headliners such as Le’Veon Bell, Ben Roethlisberger, Antonio Brown and even Tomlin, himself, leading the way. Whether it was a holdout, a Tweet or a cryptic message about early retirement, the Steelers just couldn’t stay away from the 24/7 news-cycle.

That sentiment carried over to this season, as the holdouts, salty interviews about the holdouts, Tweets and other such distractions continued.

I say this because the Steelers have played 32 regular season games since that infamous meltdown against the Cowboys two Novembers ago, and they’ve won 26 of them. That’s right, 26 victories in a 32-game span.

Furthermore, Pittsburgh has a record of 14-1-1 over its last 16 road games. Think about that. Think about all that goes into playing a football game away from home, and how most teams are at an inherent disadvantage. Yet, the Steelers have only suffered one defeat in their last 16 games away from Heinz Field.

Could it be that Tomlin really is sincere about his familiar refrain of not paying attention to outside noise? Could it be that his players follow suit with that line of thinking? Could it be that we, meaning the fans and the media, care more about Tweets and holdouts than do the people truly entrusted with winning football games for the Steelers?

Could it be that the Steelers, while far from perfect, have a more buttoned up operation than we’d like to give them credit for? Could be it that the man in charge of having his team ready to win really is very good at his job?

The NFL is a tough business, and if the Steelers locker room really was one run amok, I doubt they’d be as consistent on the football field as they’ve been the past two seasons. Every team has talent, but it takes so much more than that to win on a regular basis.

If the Steelers really were a team in constant turmoil, we’d know it by the negative results on the football field.

However, the Steelers results have mostly been positive, a sign that things have always been going in the right direction.