It’s amazing how everyone can suddenly create a narrative and act like it’s brand-new.

As it pertains to the 2018 Pittsburgh Steelers defense and its 12 takeaways through 11 games, why are you surprised?

That season, the Steelers, a team that somehow managed to win 12 games, limped into the playoffs with just 15 takeaways. Is it any wonder they limped home after an overtime loss to Tim Tebow and the Broncos in the wild-card round? 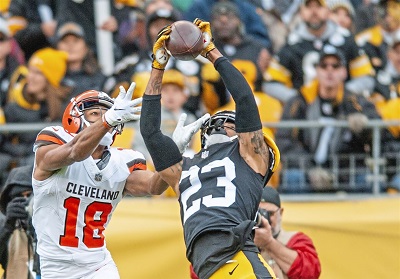 Between 2011-2017, the Steelers averaged 21.5 takeaways a season, a number far-below what a team needs from its defense if it wants to reach the Super Bowl.

Sure, that number may have decreased in recent years, what with spread offenses and rules to help offenses becoming more and more prevalent. But the fact remains you must have an opportunistic defense in-order to go far in the NFL.

So why haven’t the Steelers been able to develop an opportunistic defense, even after transitioning away from Dick LeBeau’s “Old, Slow and it’s over”  veteran defense from the post-Super Bowl days, to Keith Butler‘s current unit that’s younger, faster and much more adept at getting after quarterbacks and sacking them to the turf?

Back in the latter days of Dick LeBeau’s reign as defensive coordinator, one could legitimately make a case for his unit being past its prime. Why? In addition to failing to take the football away, it could no longer get after the passer. Between 2011-2014, the Steelers averaged around 35 sacks a season, which seemed to go hand-in-hand with the 19 takeaways they averaged.

Historically, a defense that gets after the passer is one that can also take the football away. While it didn’t get discussed much, James Harrison was closing in on Joe Flacco right before Troy Polamalu made his game-changing interception in the 2008 AFC Championship game.

Unfortunately, despite leading the NFL in sacks a year ago with 56, the Steelers defense only recorded 22 takeaways. The Jaguars, meanwhile, recorded 33 takeaways to go along with their second-best 55 sacks.

So, what was the difference? The difference may lie in a Jacksonville defense that had more splash-play-capable players who were adapt at strip-sacking and ball-hawking.

All this week, Steelers’ players and coaches have talked about the need to take the football away at a greater rate. Oh yeah? How are they going to do that? A coach may be able to preach stripping the football away from a ball-carrier, but it may require an innate ability to scoop the fumble up before anyone on the opposing team finds it.

A coach can preach ball awareness, but only the truly great defensive backs have the ability and the instinct to make a play on a pass and act like they have just as much of a right to it as the receiver they’re covering.

again on pace for 56 sacks. But no matter how much  the coaches may preach it, and no matter how much the players may start to focus on it, it appears Pittsburgh’s defense still lacks–even after all these years–the talent to make it opportunistic.