In addition to coming under fire for yet another road loss to a heavy underdog (Pittsburgh was favored by 11.5 points), Mike Tomlin is feeling media, fan and even former player wrath for his coaching decisions in Oakland that included keeping his franchise quarterback, Ben Roethlisberger, stationed on the sidelines for the majority of the second half after he sustained bruised ribs late in the second quarter.

A chronic symptom would be Mike Tomlin’s poor clock-management skills as evidenced by his failure to properly use his timeouts when the Raiders had a first and goal with less than two minutes remaining and were driving for what turned out to be the game-winning touchdown. 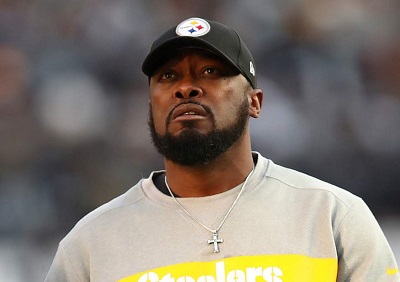 Then, of course, there’s Mike Tomlin’s inability to rebuild the defense as well as his team’s perceived lack of discipline and preparation.

If you’re a long-time detractor of Mike Tomlin, this week has probably been heavenly bliss, considering both questions have been asked ad nauseam. However, if you’re also a long-time supporter of the Steelers, you better hope Mike Tomlin can pull off perhaps his best coaching job over the final three weeks of the regular season.

Because, no matter what you may think of the man, his body of work speaks for itself, and he certainly didn’t amass such a lofty resume — one that includes 11-straight non-losing seasons, six AFC North titles, two AFC championships and a Lombardi trophy — by accident.

In other words, Mike Tomlin may be in a coaching slump these days, but he’s certainly more than capable of coaching his football teams out of funks, something he’s been able to do time and time again. The jury may still be out on 2018, but Tomlin  never lost a football team in the past, not after his franchise quarterback got suspended to start the 2010 season; not after his football team started 0-4 and 2-6 to begin the 2013 season.

Losers of three-straight games, the Steelers (7-5-1) may still occupy first place in the AFC North by a half-a-game over the Ravens, but with match-ups against perennial juggernaut New England this week and 2018 buzz-saw New Orleans in Week 16 looming on the horizon, that lead seems tenuous and temporary.

How will they respond? At the moment, very few people give Pittsburgh a chance to defeat  New England this week, which is unfortunate since the 2018 version seems vastly inferior to many Patriots teams of yesterday.

The Patriots mystique is a strong one: “Oh no, the Patriots are going to be fighting mad after losing to the Dolphins!” However, the 2018 Patriots are more myth than they are reality. They’re definitely ripe for the picking, and if the Steelers were rolling the way they were in 2017, no doubt you’d have to like their chances.

But with the exception of last season, when they came into the match-up riding an eight-game winning-streak, the Steelers never seem to play New England at the right time. Three years ago, it was as the dreaded road team in the Thursday night regular season kickoff in Week 1.

A year later, the match-up with the Patriots came one week after Ben Roethlisberger suffered a torn meniscus in a game against the Dolphins, thrusting Landry Jones into the starting lineup. And, obviously, this season, the match-up takes place when the Steelers seem to be in an irreversible death spiral.

It doesn’t really matter at this point. What matters is whether or not Mike Tomlin can pull off a coaching performance befitting his coaching resume.

The Steelers 2018 season depends on it.