Just a week ago you could muse that the Steelers might be on the verge of a breakout without risking being labeled as a hopeless homer. I did just that, asking if the Steelers recent troubles signaled that the team was regressing to the mean or if perhaps, Pittsburgh was primed for a serious playoff run.

“Regressing to the mean” is a nerdy statistical term that doesn’t seem to belong in a football blog. So a more illustrative way to think of what is going on is that the Steelers started the season morbidly cold, got red hot in October and early November, but are now finding room temperature in December. 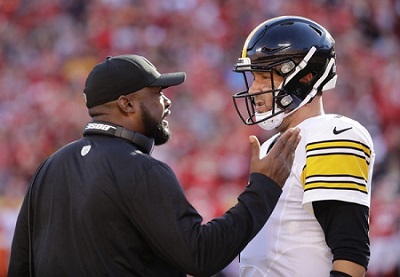 And that’s what’s going on. One could reasonably look at the Steelers performances in September and imagine this team contending for a top ten draft pick. By the time November arrived, they looked like AFC Championship, if not Super Bowl Championship material.

But what does finding room temperature really mean for this group of Pittsburgh Steelers? Does it mean that the Steelers will tease but ultimately lose to the New England Patriots and New Orleans Saints only to finish the season with a face-saving win over the Bengals?

The way the Steelers have played, and more importantly, the plays they have chronically failed to make at critical junctures during losses to Denver, the Chargers and Raiders make it near impossible to trust this team.

If the law of averages governed outcomes of football games, what could we conclude? Well, let’s take a look at an interesting stat someone posted on Twitter:

That doesn’t seem promising, does it?

Yet, if already having dropped games to Oakland and Denver, it would almost seem like the odds favor the Steelers beating either New Orleans or New England. The Steelers positive performances would also seem to suggest that Pittsburgh is due for just one more fireworks display during this regular season.

And New England would seem to offer the best shot. Yes, the Patriots are the Patriots. And yes New England has owned Pittsburgh for a generation. And the Steelers are going to play the game without James Conners and with Stevan Ridley promising revenge against his former team (oh, I’m sure the threat of Ridley’s revenge has Bill Belichick quaking in his boots.)

But does the prospect of Artie Burns and Cam Sutton replacing Coty Sensabaugh and Mike Hilton inspire confidence that Steelers will finally crack the Tom Brady to Rob Gronkowski riddle? No, it does not.

Aside from their own deficiencies, the ball has not bounced the Steelers way much this season. They seem due for a break. But remember, dice don’t have memories. Call me out for a cop out if you want, but I’m going to fall back on the Joe Gibbs party line that I heard so often growing up in the Washington D.C. suburbs, “I really don’t know what to expect.”