Heading into their critical Sunday night show down with the San Diego er um, Los Angeles Chargers, the Pittsburgh Steelers made personnel moves, one expected, the other a bit of a surprise.

During the preseason Ola Adeniyi, whose full name is Olasunkanmi Adeniyi, was one of the stand out players for the Steelers defense as he recorded 3 sacks, and was a regular presence in the offensive backfield. 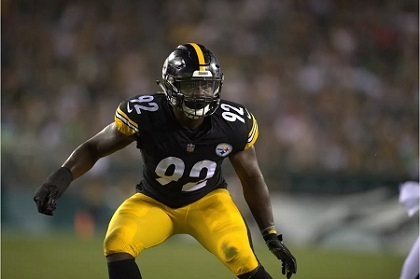 However, their move to make room for Ola Adeniyi does count as a bit of a surprise, as Mike Tomlin and Kevin Colbert chose to wave inside linebacker Matthew Thomas. Matthew Thomas joined the Steelers as part of their 2018 undrafted rookie free agent class, and had a stand out effort in preseason.

In fact, just prior to the opener, Jim Wexell reported some Steelers coaches were considering the possibility that Matthew Thomas could be splitting time with starters Vince Williams and Jon Bostic by the end of the season.

That role for Matthew Thomas never materialized, as the Steelers have turned to L.J. Fort as their primary backup at inside linebacker. The Steelers can of course resign Matthew Thomas to their practice squad, but he would have to clear waivers first.

In other injury-related news, safety Morgan Burnett is also likely out against the Chargers, paving the way for rookie Marcus Allen to see his first playing time of the year taking over the role of dime linebacker.

Starting right tackle Marcus Gilbert has been ruled out leaving Ben Roethlisberger’s protection in capable hands of either Matt Feiler and Chukwuma Okorafor. Cornerback Cameron Sutton is listed as questionable.