Few contemporary Steelers fans probably even think of the Cleveland Browns as “rivals” to the Pittsburgh Steelers. That’s because in many ways the rivalry has been on hold for 23 years. But there was a time when things were different. Oh yes, once things were very, very different.

We’ll get to that in a moment. But first, let’s flash back to night it all changed. 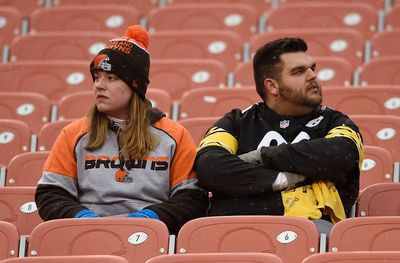 Dateline: Monday, November 13th 1995, on I-95 heading north from the DC suburbs towards Baltimore, en route to watch Monday Night Football at the legendary Purple Goose Saloon, then the home of the Pittsburgh Steelers Fan Club of Baltimore.

A clip on Baltimore’s WIYY aka “98 Rock” illustrates why. “Back goes  Eric Zeier to pass. Andre Rison is open in the end zone. He throws, Rison catches it. Touchdown, Baltimore Browns!”

Less than a week before the unthinkable and once impossible had occurred. After building facilities for the Cavaliers and Indians, the city of Cleveland had shifted focus to building one for the Browns.

Yet, during the summer, Browns owner Art Modell cut off negotiations in the name of focusing on winning a Super Bowl. Little did we know, Modell had secretly begun negotiating with the Maryland Stadium Authority to move his team to Baltimore. Municipal officials in Cleveland plowed ahead without Modell, and announced a November 7th ballot referendum to fund a new stadium for the Browns.

Usually when a team relocates, its because they lack local support. No one could say that the Cleveland failed to support the Browns. Every game was sold out, and television ratings were among the highest in the league.

I’m sick about (the move). This is the best rivalry in sports. To go up there to play in Cleveland on that grass field on a gray day – I don’t want to get dramatic, but it really is something. It’s the essence of football.

As fate would have it, the Browns first game after the move came against the Steelers at Three Rivers Stadium. Steelers fans of that generation were genetically hardwired to hate the Cleveland Browns and their fans. 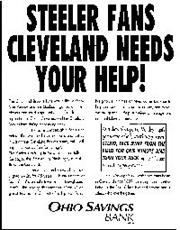 But as a show of solidarity, Steelers fans wore orange arm bands that night. (Terry Bradshaw even wore one while interviewing Paul Tagliabue about the move.)

Just two years earlier, Jerry Olsavsky had blown out all four ligaments in one of his knees Cleveland Municipal Stadium, yet fans at the Dawg Pound threw beer bottles at him as he was being taken away from the field on stretcher. As Tim Gleason recounts in From Black to Gold, cars with Pennsylvania license plates would get their tires slashed if they were parked near Cleveland Stadium during a game.

An old friend of my from college named “Mike” told me of how his father had to protect him from a drunk who tried to attack him at a game in Cleveland in the early 80’s because he was wearing a Steelers shirt – Mike was 6 years old at the time.

The Steelers-Browns rivalry has never been the same since. And now, 23 years later, the Steelers fans need something from the Browns. Today at Heinz Field, the Steelers need Ben Roethlisberger, Antonio Brown, JuJu Smith-Schuster, James Conners, Vance McDonald, Cam Heyward and Joe Haden to take care of business against the Bengals.

But the Steelers also need the Browns defense to stop Lamar Jackson and Baker Mayfield to make his magic work for one more week.

But a Browns win at Baltimore would also signify that the franchise is poised to return to contender status next season, transforming games against the Browns into competitive affairs. If that happens, then the Steelers-Browns rivalry will indeed have come full circle.