Taken from the grade book of a teacher depressed to see his students tripping instead of leaning in as the finish line approaches, here is the Pittsburgh Steelers Report Card for the meltdown against the Chargers. 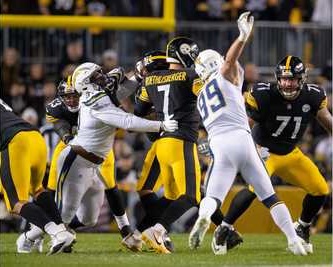 Quarterback
Ben Roethlisberger’s stat line of 19-45 for 281 for 2 TD’s and 1 pick looks respectable. And the Steelers signal caller looked sharp at times. Yet his interception was costly and likely took points off the board. He also failed to connect with an open WR, although the WR may be responsible, nonetheless that also took points off the board. That brings Ben below the line. Grade: D

Running Backs
James Conner had two touchdowns and 60 yards on 15 carries including a long run and a key 4th down conversion. Roosevelt Nix looked strong blocking. Jaylen Samuels had two carries for 5 yards and looked good scoring Pittsburgh’s last touchdown through the air. Grade: B

Tight Ends
Vance McDonald might not be Pittsburgh’s Gronk, but he can catch tough passes over the middle, more importantly, he can move DB’s to gain extra yards. Jesse James had one catch for 7 yards and blocked well. Grade: B

Wide Receivers
The WiFi was on as Antonio Brown looked every bit the Steelers number one wide receiver as he caught 10 passes for 154 yards and a touchdown.  JuJu Smith-Schuster had a quieter night, going 6 for 49. Ryan Switzer had two catches for 9 yards and Justin Hunter got open for a sure TD that he either under ran or Roethlisberger over threw. Grade: C+

Offensive Line
Running backs had room to run. Ben Roethlisberger had a ridiculous amount of time to throw on many occasions. The Los Angeles Chargers only sacked Ben Roethlisberger once and only touched him 2 other times. But on the first series of the 4th quarter a holding call put the Steelers back, followed by a sack, which in turn set up a punt return for a touchdown. On this page, grades are earned based on performance and results. Grade: C-

Defensive Line
Javon Hargrave got the only pressure of the second half with his sack of Philip Rivers. Stephon Tuitt deflected a pass forcing a punt early on. Cam Heyward got pressure in the first half. However, the pressure was absent in the 2nd half, and Justin Jackson broke through to the second level too many times during the meltdown. Grade: D 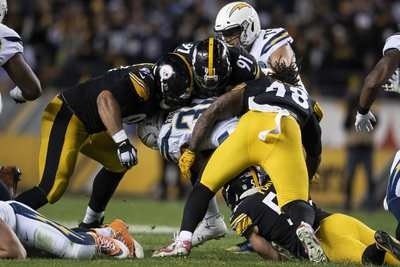 Linebackers
L.J. Fort played for most of the night and led the team in tackles. Vince Williams was next. T.J. Watt got some good pressure in the first half. Bud Dupree played injured, splitting time with Anthony Chickillo and Ola Adeniyi. The linebackers had a lot of responsibility and to their credit the Chargers got very few after catch yards. They made some strong plays in the first half, but couldn’t come up with a big play in the second half. Grade: C-

Secondary
Philip Rivers is as hot as a quarterback can be right now, and the defense contained him in the first half, not so much in the second half. Terrell Edmunds had some nice plays and made the only splash play of the night for the defense. Joe Haden would have had an interception in the end zone but got KOed by Sean Davis instead. That could have been the difference in this game. Again, the Steelers defense needed a take away in the 2nd half and didn’t get one. Grade: D

Special Teams
Sure, the Steelers had a partially blocked punt that was nice. Jordan Berry boomed off some nice punts. But Chris Boswell missed another extra point. And the Steelers special teams seemed to commit penalties on each return.  Again.

YES, it should have been called back and wasn’t. But that one illegal block in the back didn’t prevent the other 10 guys from not touching the returner. Grade: F

Whenever a team suffers such a catastrophic 2nd half meltdown, the easy out is to point the finger at the coach for allowing complacency to set in.

No one can be accused of mailing it in. And nor can Mike Tomlin be faulted for the critical plays where officiating wasn’t at the issue. Tomlin didn’t throw the pick, miss the PAT or collide with his fellow defensive back to break up an interception.

With that said, Ben Roethlisberger has now attempted over 45 passes or more in 4 of his last 5 games. While the results are not universally bad, a more balanced approach would be welcome, particularly because the Steelers have shown they can run the ball.

However, perhaps these last several games have revealed the truth that the 2018 Steelers defense is a unit that is capable of playing well for stretches, but one that simply doesn’t have the talent to do all it needs to do during a 60 minute football game. Grade: D

Unsung Hero Award
Had the Steelers won, this space would consider several candidates for the award. But critical failures in all three phases contributed to the second half meltdown and trying to award an Unsung Hero Award feels a little bit too much like the pro version of giving out a participation trophy so we won’t do it here.