The Steelers history against the New Orleans Saints has Pittsburgh taking a 7-8 record down to the Big Easy where the Steelers are 4-5 vs. 3-3 at Heinz Field and Three Rivers Stadium.

As the Steelers prepare for their 10th trip to New Orleans for a game that could make or break their 2018 season, here is a look at highlights of the Steelers last 31 years of history against the Saints. 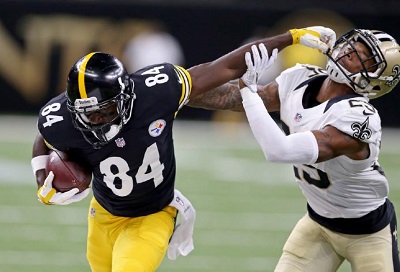 1987 – Steelers Playoff Potential Nothing More than a Tease

The 1987 Steelers were looking to build on a 6-4 record as Pittsburgh was very much alive in the AFC Central playoff picture during that strike shortened season. The Steelers took a 14-3 lead into the locker room at half time on the strength of a Dwayne Woodruff pick six and a Walter Abercrombie touchdown.

However, Pittsburgh faltered in the 2nd half as the Saint scored 17 unanswered points, aided by 3 Mark Malone interceptions. The Saints took an intentional safety at the end of the game to bring Pittsburgh to within 4, but the Steelers could not mount a comeback.

The 1990 Steelers entered the game with a 7-6 record and an an offense floundering under Joe Walton’s mismanagement. And this game shows just how badly Joe Walton had neutered the 1990 Steelers offense, as a single Gary Anderson field goal were the only points it could score for 3 quarters.

For its part, the Steelers defense held the Saints to two Morten Andersen second half field goals, until Gary Anderson booted two more 4th quarter field goals to give the Steelers the win.

The 1993 Steelers started 0-2 leading many to question whether Cowher Power’s 1992 debut had been a mirage. But Pittsburgh won its three games, leading up to a showdown with the then undefeated Saints.

Rod Woodson intercepted Wade Wilson’s opening pass and returned it 63 yards for a touchdown. Two series later Rod Woodson picked off Wilson again. On Pittsburgh’s next procession, Neil O’Donnell hit Barry Foster for a 20 yard touchdown pass, and the Steelers were leading 14-0 in less than 8 minutes.

By half time the Steelers were up 24-0, and the Saints hadn’t even managed a first down. Carnell Lake intercepted Wade Wilson’s first pass of the second half, which made way for two more Gary Anderson field goals, followed by an Eric Green touchdown.

Wade Wilson had arrived in Pittsburgh as the NFL’s number 3 passer, only to have the Steelers intercept him three times and limit him to 6 completions on the day as Donald Evans, Levon Kirkland, Joel Steed and Kevin Greene sacked him 5 times.

The 2002 Steelers had started 0-2 and only won in week three thanks to a blocked field goal plus Bill Cowher’s decision to bench Kordell Stewart late in the game for Tommy Maddox.

But the Steelers defense gave up 13 points early in the game before Tommy Maddox and Plaxico Burress connected to get Pittsburgh on the board before the half. The Steelers mounted a spirited effort in the 2nd half with Jerome Bettis, Hines Ward and Terance Mathis scoring touchdowns, the but Saints scored 13 points to keep ahead of the Steelers.

2006 – Ben Roethlisberger vs Drew Brees I

The 2006 Steelers took a Super Bowl Hangover induced 2-6 record to New Orleans to face the 6-2 Saints. Fireworks ensued as the Saints and Steelers fought to a 24 to 17 half time score. The Steelers fought back in the second half, scoring as Ben Roethlisberger connected for a touchdown to Cedric Wilson in the air as Willie Parker ran for two more on the ground.

Deuce McAllister put the Saints within striking distance of a comeback with a fumble returned for a touchdown with 8:31 remaining in the 4th quarter. But the Steelers defense burned nearly 4 minutes off of the clock, and closed the game as Tyrone Carter and Ryan Clark teamed up to end a Saints comeback effort with a forced fumble and recovery.

If the first battle between Ben Roethlisberger and Drew Brees was a shootout, their second meeting took on the character of a slug fest.

Both teams were scoreless during the entire 1st quarter, and when they both got on the board in the 2nd quarter it was only with field goals. In the second half New Orleans put 10 points on the board, but the Steelers moved to within three on a Rashard Mendenhall touchdown.

However, the Steelers defense couldn’t hold on, as Drew Brees connected with Lance Moore at just over the two minute mark to give the Saints a 10 point lead. Ben Roethlisberger attempted to rally the Steelers and got them to mid field but Leigh Torrence intercepted him as he attempted to hit Mike Wallace.

Don’t let the close score fool you. The Saints marched into Heinz Field and blew out the Steelers, with Pittsburgh only getting in theoretical striking distance of pulling ahead thanks to a 2 point conversion pass to Lance Moore, of all players, as time expired.

The offensive line gave him time, Heath Miller and Antonio Brown served as reliable targets, but Ben Roethlisberger’s passes were too often off target. Roethlisberger threw two picks, but that number could have easily been double.

Drew Brees only threw for 257 yards, but he threw 5 touchdowns, as an unknown Kenny Stills lit up the Steelers defense for 162 yards.

The Steelers history vs the New Orleans Saints offers a mixed bag, with both some impressive wins and tough losses. But none of the outcomes had season-defining implications. Today’s contest could be quite different in that respect.