Cue the “tape” from past posts, but this is one time when a blogger begs to be wrong. The injury that James Conner suffered against the Chargers is worse than expected, and Mike Tomlin has already ruled out Conner for the Raiders game.

In early September, Jaylen Samuels‘ roster spot was seen as somewhat of a luxury pending the return of Le’Veon Bell will likely start for the Steelers this Sunday in Oakland’s Black Hole. Stevan Ridley will back him up, with Trey Edmunds, Terrell Edmunds’ brother, joining the active roster from the practice squad.

Coming off of a two game losing streak, this is the last thing the Steelers need. 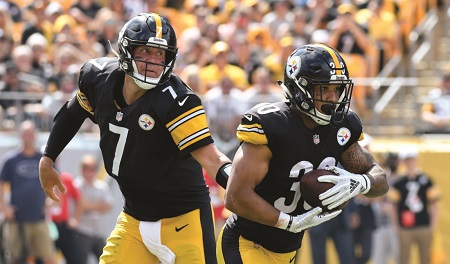 The irony here is that Mike Tomlin and Randy Fichnter may very well have been trying to avoid this situation.

Three years ago with Le’Veon Bell out and DeAngelo Williams carrying the load, Tomlin was asked if he would try to work Jordan Todman or Fitzgerald Toussaint into the lineup to prepare them. Tomlin balked at the suggestion, arguing that such a move might backfire if production suffered.

As noted in our review of the meltdown against the Chargers, Ben Roethlisberger has now thrown 45 passes or more in 4 of his last 5 games. James Conner has touched the ball less than 20 times in 4 out of those same 5 games.

While Steel Curtain Rising has exactly ZERO inside information to back this up, this shift happened just as it was becoming clear that Le’Veon Bell was going to sit out the entire year. While I can’t prove it, I suspect that Mike Tomlin and Randy Fichtner have been trying to reduce Conner’s work load by passing more.

While Jaylen Sammuels has shown promise, he’s never been a number one back before.

Mike Tomlin talked about taking a running back by committee approach, but the fact is that the success of the Steelers offense rests squarely on Ben Roethlisberger’s ability to connect with Antonio Brown, JuJu Smith-Schuster, Vance McDonald, Jesse James and James Washington.

One of the takeaways from the Chargers game should have been that the Steelers needed a more balanced approach on offense, as Ben Roethlisberger seems to be trying to do too much. Now the Steelers have no choice but to air it out.

Steelers Shuffle Roster Due to Injuries

Up until now, the Steelers 2018 roster has been fairly stable with very few in season moves. That changed today as the Steelers put Justin Hunter on injured reserve making room for Trey Edmunds.