Sometimes Iron does sharpen Iron. This summer, as the photo below details, Mike Tomlin had JuJu Smith-Schuster face off against Terrell Edmunds at St. Vincents in Latrobe and it appears to have been for the benefit of both men. 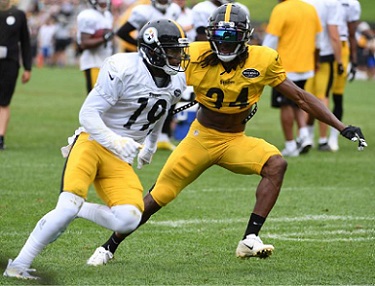 The Pittsburgh Steelers announced their year end awards this week as the players honored wide receiver JuJu Smith-Schuster as the team MVP, while the Pittsburgh Chapter of the Pro Football Writers association named Terrell Edmunds as the rookie of year aka the “Joe Greene Great Performance Award.”

Last year JuJu Smith-Schuster won rookie of the year honors as he took the Steelers wide receiving crops by strom, quickly becoming a fan favorite in the process. JuJu Smith-Schuster followed up that effort in 2019 with a performance that has seen him break the 100 yard catch and 1000 yards receiving and includes yet another 97 yard touchdown reception.

In a year when Antonio Brown started slowly with rookie James Washington struggling to get his footing in the NFL JuJu Smith-Schuster showed himself to be a player who was able to step up and pick up the slack, earning Ben Roethlisberger’s trust as a true Go-To target.

Terrell Edmunds did not have the sensational rookie year that JuJu Smith Schuster did in 2018, but move in and start at safety, and helped improve an area which had been a position of weakness in 2017.

While Terrell Edmunds only had one interception and one sack, his play improve during the course of the year to the point where he was able to shadow the New England Patriots Ron Gronkowski during the Steelers victory over the Patriots.