Trust forms the lifeblood of human relationships. Without trust, society, let alone football teams would function. Yet if trust is essential to a football team’s success, trust, as Mike Tomlin is finding out, can get you into trouble.

Anyone of those can scuttle the fortunes of a football team. But there are other ways that trust can fail. Think of the parent who instills sound study habits in their children, proctors nightly homework sessions, tutors intensively before tests only to see their child try their damndest yet fall flat on their faces when exam time arrives.

And therein lies Mike Tomlin’s biggest mistake from last Sunday – he placed too much trust in his defense. 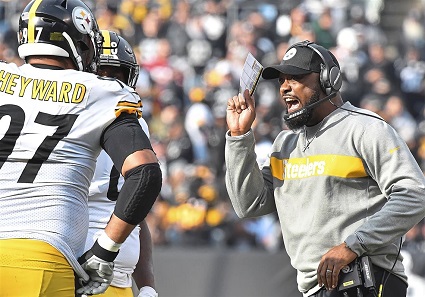 Let’s be clear: This site harshly criticized Mike Tomlin after the loss to the Raiders. I stand by those criticisms. By Tomlin’s own admission, medically speaking, Ben Roethlisberger could have entered the game one series earlier than he did.

When Ben did enter the game, he moved the offense at will, opening with a completion to Antonio Brown, then he hit Jaylen Samuels before connecting with JuJu Smith-Schuster on four straight passes.

There’s no reason to think that things would have been any different if Ben would have replaced Joshua Dobbs one series sooner. And holding Ben out was game changing, and perhaps season ruining decision.

It is easy to scoff at such a notion given the way the Steelers defense has given up easy touchdown drives all season long, and particularly at the end of halves.

But remember that the Steelers defense is fielding 4 first round picks, 2 second round picks, 1 third round pick, and two major free agent signings. And that doesn’t count Cam Sutton and Artie Burns who weren’t playing.

And if “Heinzsight’s” film reviews over on Steelers 247 are to be trusted (and they should) then it is pretty clear that the Steelers defenders have been in the correct coverages and executing those coverages fairly well, but have been failing to make plays.

Consider the catch that Seth Roberts made in between Terrell Edmunds and Morgan Burnett.

Slam both of them for failing to make a play, but the men were where they needed to be.

Throughout his career, when the game is on the line, Mike Tomlin has repeatedly put its outcome in the hands of his players. Think of handing off to Le’Veon Bell with no time left against San Diego in 2015, or having Ben Roethlisberger throw to Antonio Brown on Christmas in 2016.

Against the Raiders, Mike Tomlin placed a similar trust in his defense, but unfortunately the Steelers defense failed to deliver.