In a stunning development 2 days before their 2018 season finale, the Pittsburgh Steelers placed place kicker Chris Boswell on the injured reserve list and signed Matt McCrane has his replacement. 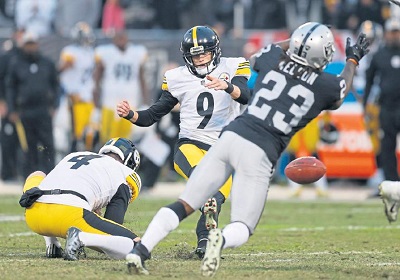 Chris Boswell won the try out, and although he missed a 32 yard field goal in the middle of the 3rd quarter, Mike Tomlin unhesitatingly sent him out to kick a 48 yard insurance field goal late in the fourth quarter of the Steelers win over the Patriots. Against the Saints, Boswell kicked field goals of 49 and 30 yards and made both extra point attempts.

Steelers place kicker Chris Boswell on Injured Reserve, sign tryout kicker Matt McCrane. Talked to Boswell on Thursday and he thought he had turned the corner after three straight make, but turns out he was dealing with something.

However, over on 247Sports.com, Jim Wexell is reporting that Chris Boswell entered the game against the Saints with a groin injury. That is certainly possible, but his name has not appeared on the injury report this week or the week before.

In the word of Behind the Steel Curtain editor Jeff Hartman: “McCrane has played in four games this season, and his stat line looks like a kicker who would be available in the waning weeks of the regular season.”

With the way the Steelers luck has run this season, the Cleveland Browns will surprise everyone with a decisive upset win over the Baltimore Ravens, only to have the Steelers Bengals game come down to a last second field goal attempt by McCrane…

Sean Davis returned to practice for the Steelers reducing the likelihood that Jordan Dangerfield or Morgan Burnett will play in his place. Antonio Brown also missed practice, leaving his status in doubt. If Antonio Brown misses the game James Washington will likely start alongside JuJu Smith-Schuster.

While losing Brown would be a blow, Eli Rogers‘ return and Vance McDonald‘s presence should give Ben Roethlisberger plenty of targets.