Taken from the grade book of a teacher struggling with the sobering sight of once star students stumbling toward mediocrity, here is the Pittsburgh Steelers Report Card for the (latest) loss to the Raiders in Oakland’s Black Hole.

Quarterback
Ben Roethlisberger was 25 for 29 for 2 touchdowns and no interceptions, although he had some close calls. But Ben moved the offense at will in the 4th quarter and did well in the first half. Joshua Dobbs saw his first extensive work, and he disappointed. While his passes weren’t wild they were also a little off. Dobbs best play was a run, which is never good for a quarterback. Dobbs led the offense to two punts, an interception and a turnover on downs. Not good enough. Grade: D

Running Backs
Mike Tomlin can claim that rushing the ball is an 11 man job, but we know that neither Jaylen Samuels or Stevan Ridley will be a threat on the ground anytime soon. As a positive, Roosevelt Nix made a great block and Ridley hit the hole perfectly for the first TD, Jaylen Samuels looked really good coming out of the backfield. Grade: C

Tight Ends
Both Vance McDonald and Jesse James made a number of key catches up the middle on an afternoon where Steelers offense put a premium on those short and medium passes. McDonald, however could not convert on the 4th and one, and he missed his block on Darrius Heyward-Bey’s reverse. Grade: C

Wide Receivers
Antonio Brown had a slow afternoon but still caught 5 of 7 balls thrown his way. But one of those set up a score and another sparked the 4th quarter rally. The real star of the Steelers offense was JuJu Smith-Schuster, who literally is budding into a super star before our very eyes with 8 catches for 130 yards. James Washington caught two passes for 28 yards. Grade: A-

Offensive Line
The Raiders only sacked Ben Roethlisberger once and kept the Steelers quarterbacks clean, but Oakland’s rushing defense is one of the worst in the league, yet the Steelers offensive line could do nothing to take advantage of them. Even a smidgen of rushing offense could have made a difference in the 2nd half. Grade: C-

Defensive Line
Stephon Tuitt made another splash play, while Cam Heyward and Javon Hargrave took turns stoning Raiders runners at or behind the line of scrimmage. This was nice, but the Steelers really needed someone to make a stop on 4th and 1. That’s not all on the line’s shoulders, but it starts with them. Grade: D 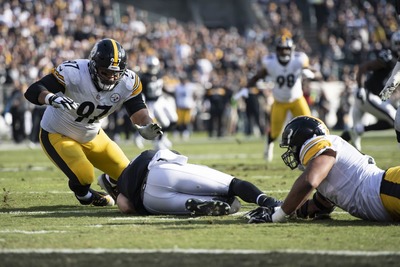 Linebackers
T.J. Watt tipped a pass and looked stout in run support as did Bud Dupree who added a sack. L.J. Fort saw extensive time at inside linebacker, and most frequently the back of his jersey was seen chasing down wide receivers or tight ends. The fact is that Oakland was able to complete passes down the middle when it needed to, and while that’s not all on the linebackers they must do their part. Again, where was the drive-ending 4th quarter splash play? Grade: D

Secondary
Mike Hilton came up with a key sack and recovered a fumble. However, he had his hands on a pick that got away, as did Sean Davis. Mike Hilton also blew the coverage on the game winning touchdown. Morgan Burnett came up with a nice pass deflection in the end zone, but that was only after he and Terrell Edmunds got burned for the Raider’s 39 yard pass that set up their final score. The Steelers played the Raiders tight at times, but when it counted, in the 4th quarter, Oakland sliced through Pittsburgh’s secondary as if it were Swiss cheese. Grade: F

Special Teams
Ryan Switzer had some decent punt and kick returns, and the Steelers return coverage was solid. None of Jordan Berry’s punts were returnable. All positives.

Coaching
The Steelers offense was bound to be one dimensional, and yet Randy Fitchner came up with a solid game plan given the limitations and his players executed it well enough.

When the Steelers get pressure on the quarterback this defense is capable of playing with just about any offense in the league. And, as compared to a year ago, the Steelers defense isn’t giving up big plays in droves the way they were.

But the Steelers pass rush is only solid when it needs to be relentless. And that reality, along with coverage lapses and inconsistencies against the run adds up to a brutal truth:

While a lot of fans are ready to scapegoat Keith Butler, it is entirely possible that Butler is doing well with the talent he has at hand. Hum, “The talent he has on hand” that’s an interesting concept to take into account when evaluating Mike Tomlin’s performance in this game. 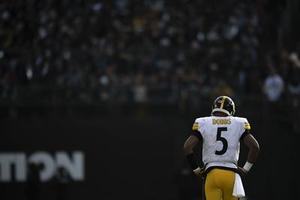 Mike Tomlin is taking heat for his use of time outs when the Raiders were in the Red Zone, but this scribe strongly suspects that Tomlin was giving his defense a chance to “Grow up” so to speak. If that’s the case, then its hard to fault his motive, even if his defense clearly wasn’t up to the challenge.

Per Mike Tomlin’s own admission, Ben Roethlisberger was “medically cleared to play” when he reached the sideline. Tomlin also conceded that Ben could have come back in the game a series earlier.

Who knows why Mike Tomlin kept Joshua Dobbs in when Ben was ready to return? Really, it doesn’t matter because it was the wrong choice, a choice that will carry consequences far beyond dooming the Steelers to a loss to a 2-10 team. Grade: F-

Unsung Hero Award
Being asked to step into James Conner’s shoes cannot be easy, but that is what the Steelers asked of Jaylen Samuels. And while Samuels struggled running the ball, he did quite well as a pass catcher, and really impressed with his second efforts and determination to grind out extra yards. And for that Jaylen Samuels wins the Unsung Hero Award.