Steelers wide receiver James Washington has had a disappointing year thus far but comparisons to Limas Sweed must stop.

Full disclosure: If you frequent this site, you know that I called out James Washington after the loss to the Broncos and said that his play was making activating Eli Rogers an attractive option. And when Eli Rogers returned to practice, I augured that the Steelers offense currently lacks a legit number 3 wide receiver. 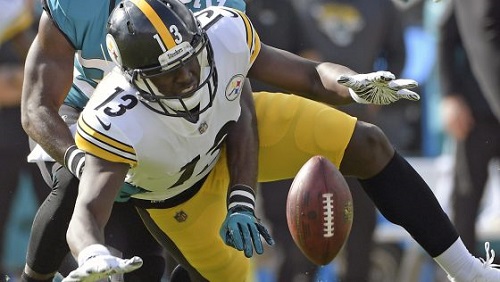 But if it is true that James Washington’s rookie campaign pales in contrast to JuJu Smith-Schuster‘s efforts just one year ago, then it’s even more true that JuJu’s rookie performance was an exception.

Pittsburgh 247’s Jim Wexell took aim at the Limas Sweed comparison, and after conceding that both were from Texas, both 2nd round picks, and both having grown up on farms, he offered this insight:

Through the same points in their 2010 rookie seasons, Antonio Brown had two catches in 21 targets; Emmanuel Sanders had 13 catches in 23 targets.

Compared to Antonio Brown, James Washington is killing it with his 8 catches on 25 targets! But in that light he’s no different than other rookie Steelers wide receivers who started slowly.

As a rookie, Hines Ward had 15 catches on 33 targets. While targeting numbers aren’t available, Lynn Swann had 11 catches and John Stallworth had 16. Combine those numbers and they hardly project to one Hall of Fame career, let alone two.

But Yancey Thigpen, while not a rookie, had all of one catch during his first season in Pittsburgh and only 9 more his next (although 3 of those were for touchdowns.) Ernie Mills had two catches as a rookie. Both went on to author fine careers as Steelers.

Troy Edwards caught 61 passes as a rookie and scored 5 touchdowns. He started 1 game and caught 37 passes in two more seasons in Pittsburgh, and never matched his rookie campaign in 4 more seasons in the NFL.

Saying that James Washington’s rookie season has disappointed this far is simply observing the truth, but writing him off as a bust is foolishness in its purest form.