The Steelers traveled to New Orleans for a make or break game and dropped a 31-28 decision to the Saints despite playing one of their best games this season. Consider:

Yet, at the end of the day, it was not enough. It was not enough because the difference between victory and defeat, as it has so many times this season, came down to ball security. 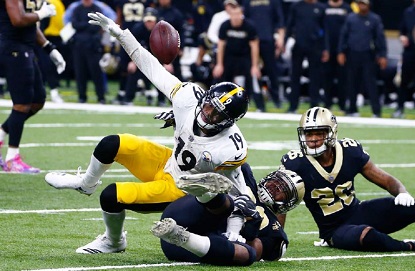 A Word on the Pass Interference Penalties

I avoid complaining about the officiating and bad calls like the plague. It is not because these issues don’t impact the outcomes of games – they do. But bad calls are part of the game, and good teams, or at least championship teams, find ways to overcome them.

That final bullet point isn’t theoretical conjecture – both pass interference calls came on 4th downs. But both calls went for the Saints and the Steelers failed to overcome them, and that’s where this post-game analysis will focus. But first….

Great Efforts Despite the Loss

It is no secret that the New Orleans Saints are favorites to represent the NFC in the Super Bowl this season. And the Pittsburgh Steelers played like a team which could have been playing to deny the Big Easy their second Lombardi.

Antonio Brown was in championship form. His 14 catches for 185 yards and two touchdowns do not do justice to the decisiveness of his on the field presence. I have little doubt that had the Steelers not fumbled on their final drive, Brown could have found his way to the end zone on the next play.

JuJu Smith-Schuster also did his damage with 11 catches for 115 yards and proved yet again that the Steelers have a rising star on their hands. Eli Rogers only had one catch, but it was for a two point conversion.

On defense, T.J. Watt and Stephon Tuitt came up with sacks to force punts in critical situations. Coty Sensabaugh, Cam Heyward, Morgan Burnett Sean Davis and Anthony Chickillo all deflected passes – a skill that too often has been in short supply in Pittsburgh. Chris Boswell hit two field goals and made his other two PATs.

Those were all championship-level efforts. But alas, the result likely ended the championship aspirations of the Steelers.

A Word about the Steelers Defense

New Orleans has one of the hottest offenses in the NFL. The Saints have topped 40 points six times this season and broken the half-century mark once. Giving up 31 points to the Saints at home, especially when the zebras are not calling things your way, carries little shame.

After the Steelers tied the score 40 seconds remained. Instead of sitting on the ball Sean Peyton remained aggressive, and the Steelers gave up a couple of short passes, before allowing Alvin Kamara to beat Vince Williams over the middle as Joe Haden and Mike Hilton over pursued, opening the door to a 31 yard gain which allowed Wil Lutz to knock in a 43 yard field goal.

And two plays after the 2nd phantom pass interference call went against Joe Haden, the Steelers defense also gave up a 3rd and 20 conversion, which is a play you simply can’t let the offense have when defending a 4 point lead with 1:41 left to go.

Even so, those defensive breakdowns wouldn’t have mattered, things had broken a little differently for the offense.

Immediately after the game, site writer Tony Defeo emailed that to me, which immediately crystalized my thoughts on the game. The 2018 Pittsburgh Steelers have opened themselves to criticism on many fronts. They’ve also had some incredibly bad luck. And they’ve suffered from some incredibly incompetent officiating.

(OK, losing Joe Haden would have been devastating.) But all of that would count for naught if the Steelers could have mastered one basic football fundamental: Protect the ball at all costs.

According to TeamRankings.com, the Pittsburgh Steelers have lost an average of 0.6 fumbles a game which ranks them at 23rd worst. But what that ranking doesn’t measure is how costly those fumbles have been.

In week 1, James Conner fumbled at the Steelers 18, which the Browns returned to Pittsburgh’s 2, and promptly scoring to get back in the game. Later in the season, Xavier Grimble committed his infamous goal line fumble, whipping a touchdown off the board in a game the Steelres would ultimately lose by 7.

The Steelers defense held the Saints, and L.J. Fort added the cherry on top by blocking the ensuing field goal attempt. But Ridley had fumbled at New Orleans 34 yard line, when the Steelers were broaching field goal territory. The Steelers could have used those 3 points or more.

With just 0:41 seconds remaining in the fourth quarter, JuJu Smith Schuster had touched the ball 173 times in his fledgling NFL career. And not even once did he put the ball on the ground.

Only a fool would scapegoat JuJu Smith-Schuster for this error, as JuJu is one player who should give hope to Steelers fans when they look to the future.

But it doesn’t change the fact that JuJu Smith-Schuster’s fumble cost the Steelers a chance to pull off a comeback and likely cost them a chance at the playoffs and an opportunity to make a run at Lombardi Number 7.

That is an ugly lump of coal to find in your stocking on Christmas Morning, but that’s nonetheless what happened.