“Philip Rivers drops back to pass. It’s intercepted in the end zone by Joe Haden, what an incredible play by the savvy veteran out of Florida! The way he read River’s eyes and under-cut Keenan Allen‘s route. Simply brilliant!”

That aforementioned play–and the radio description by legendary play-by-play man, Bill Hillgrove–never took place during the Steelers December 2 game loss to  the Chargers at Heinz Field on Sunday Night Football.

Actually, it sort of almost happened, only, instead of securing an end zone interception that would have all-but secured victory–Pittsburgh led 23-7 with 1:43 remaining in the third quarter–free safety Sean Davis collided with Joe Haden, knocking the football from the veteran corner’s grasps and into the waiting arms of Allen for an easy touchdown. 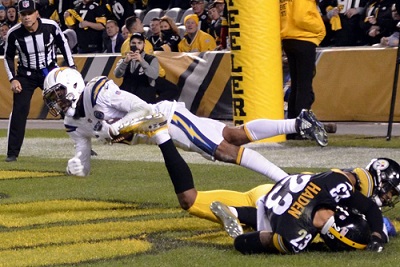 While the opening paragraph to this article is fiction, I believe it underscores just how unlucky and unfortunate the Steelers were in 2018, as they finished 9-6-1 and out of the postseason for the first time since 2013.

This isn’t the say the Steelers were just victims in their postseason-less January, something that was facilitated by losing four of their final six games.

When you finish -11 in takeaways, when you throw interceptions in the Red Zone, fumble at the goal line and commit egregious penalties at crucial moments, you deserve your share of the blame for your own demise.

But you know how some people say certain teams are destined for a championship season (“It was a team of destiny!”)? I think it’s safe to say the 2018 Pittsburgh Steelers were ill-fated from the start.

In-fact, had the Steelers actually found a way to make it into the postseason and procure a championship once they got there, a fitting title for their 2018 highlight reel may have been: “Overcoming the Odds.”

It all began in week 1 when All Pro running back Le’Veon Bell decided to make the Browns game in Cleveland his first of 16 absences on the way to a season-long holdout.

James Conner had a great day in his debut as a starting running back, as he rushed for 135 yards and two touchdowns, while adding another 60 receiving yards on three catches. But, leading 21-7 midway through the fourth quarter, what were the odds that Le’Veon Bell would have fumbled like James Conner did, a turnover that paved the way for a Browns comeback that ultimately led to a 21-21 final score and, dare I say, Pittsburgh missing the playoffs by one-half game?

Go back a bit further in that Cleveland game, when it appeared that a Steelers punt glanced off of the helmet of a Browns player before Pittsburgh recovered. What were the odds of an official looking at the replay and finding inconclusive evidence of the ball actually touching the helmet? I guess the odds were good enough to award Cleveland the football.

Speaking of that day, what about the missed field goal in overtime by Chris Boswell that would have won the game even after those two unfortunate fourth quarter plays? It was raining, and I’m sure this caused Boswell to overcompensate, but who could have guessed that this gaffe by the Pro Bowl and now highly-paid kicker would prove to be the catalyst for a season-long slump in-which he missed a total of 11 kicks–six field goals and five extra points?

When you examine the course of the 2018 campaign and see how much untimely missed kicks, red zone and end zone interceptions and Red Zone and end zone fumbles directly affected games, it makes you realize how fine the line is between winning and losing from one season to the next.

And while we’re not forgetting stuff, let’s not forget about the rib injury suffered by quarterback Ben Roethlisberger in the game against the Raiders on a lone sack by a defense that came into the day with 10. The injury forced Ben Roethlisberger to miss 25 minutes of the second half, with the Steelers leading by four points until right before he re-entered.

Given the way Ben Roethlisberger played that day, it’s a safe assumption that Pittsburgh would have won rather comfortably had the rib injury never occurred. Instead, the Steelers suffered yet another inexplicable loss to a really bad Raiders team.

Why was Roethlisberger held out by head coach Mike Tomlin? Was it really due to faulty x-ray equipment in the bowels of Oakland Alameda-County Coliseum? Was it just arrogance on Mike Tomlin’s part where he thought the defense could hold down the fort with Josha Dobbs at quarterback?

Maybe it was just bad luck.

No matter how you break things down, it just wasn’t in the stars for your 2018 Pittsburgh Steelers.