As the Steelers sputtered to an uninspiring 16-13 win over the lame duck Cincinnati Bengals, the post-game analysis seemed to write itself. The headline “Steelers Sloppy Win over Bengals Proves Pittsburgh Doesn’t Deserve Playoffs” appeared ready to spontaneously spring to life. On offense the Steelers lacked big game focus and, at times, it even appeared that the Bengals defense wanted it more.

But as fate would have it, an internet access outage on 31st prevented me from writing, or following much of the post game chatter. And that turned out to be a blessing in disguise, once again reinforcing the lesson that sometimes a bloggers best friend is an inability to provide instant reactions. 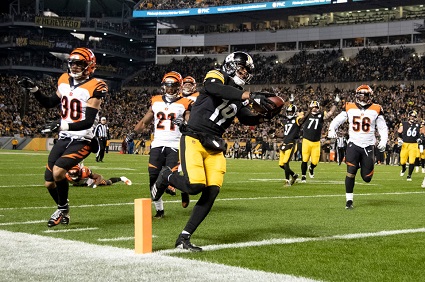 As it turns out there was more than meets the eye. 24 hours after kickoff, Ed Bouchette and Gerry Dulac of the Pittsburgh Post-Gazette confirmed something that Jim Wexell (and probably others) appeared to be hinting at: Discipline, not injury was what kept Antonio Brown from playing against the Bengals.

While exact details vary, Antonio Brown got into a heated argument with one of his teammates on Wednesday, some say it was Ben Roethlisberger although Roethlisberger is denying this, threw a football at a player, and sat out practice for the rest of the week.

The Steelers offense struggled in his absence. JuJu Smith-Schuster, fresh off winning the team MVP award, didn’t appear to be ready to carry the load as the team’s number one wide receiver. James Washington made another, nice 55 yard catch but made little other noise. Vance McDonald and Jaylen Samuels had a few nice grabs, but nothing game-changing.

Not surprisingly, the Steelers struggled on 3rd down, making it harder to commit to the ground attack as the game wore on. The Steelers offense appeared to be out of sorts for most of the game. Maurkice Pouncey, the undisputed leader of the offensive line, give up two penalties on one drive. The line itself appeared to be off its game as Ben Roethlisberger’s lone sack masks the 7 hits he took.

Mike Tomlin’s critics will no doubt pounce on that as further ammunition that he’s lost control.

I’m not ready to go there. Antonio Brown’s antics appeared to be a distraction early in the season, yet Tomlin appears to have kept them in check for most of the year. Critical fans should remember that even disciplinarian coaches such as Bill Parcells have struggled with diva wide receivers.

While I’m not ready to completely excuse Mike Tomlin and his staff for the offense’s lackluster performance, the Brown Blow Up explains a lot.

Don’t Blame it on The Butler This Time

Right now Steelers Nation appears to be divided into two camps. One that thinks Mike Tomlin (and the rest of his staff) must go, and another than thinks that at the very least Keith Butler must get the ax. While the Steelers defense has issues, I’m not convinced that Keith Butler is the root of their problems.

Against a second string Cincinnati Bengals offense and fighting against the drag of an offense that punted 5 times including three 3 and outs, Keith Butler’s defense limited the Bengals offense to two field goals.

Along the way, T.J. Watt had yet another strip sack and another forced fumble. Cam Heyward had 2 sacks, while Stephon Tuitt and Anthony Chickillo split another sack. Morgan Burnett and Tuitt came up with pass deflections at critical moments in the game, while Coty Sensabaugh added two more deflections to his total.

The Steelers closed out 2018 with the win that they needed, but the Cleveland Browns couldn’t quite deliver the help necessary to push Pittsburgh into the playoffs. So be it.

What exactly that means going forward is a question I will address in the coming days, but for now I’ll simply say that a close win over Cincinnati combined with a close loss by Cleveland to Baltimore provides a fitting end to a frustrating season.