In his postmortem press conference Mike Tomlin promised changes and is not waiting long to implement them. The Steelers announced that they will not renew outside linebacker Joey Porter’s  contract, effectively firing him.

In fact, one of Mike Tomlin’s first decision upon becoming head coach was to let Joey Porter go a move, that while controversial at the time, paved the way for James Harrison to join the starting line up. 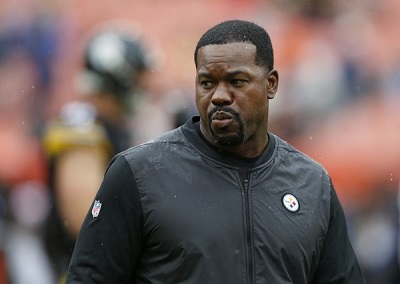 One of the reasons why Mike Tomlin parted ways with Joey Porter was because of an altercation that he reportedly had with Ben Roethlisberger during the Steelers 8-8 Super Bowl hangover induced season following their victory in Super Bowl XL.

Jarvis Jones never developed into a player, Bud Dupree has improved since his rookie year, but the consensus is that he still relies more on athleticism than refined skill. T.J. Watt appears to be blossoming into a legitimate Super Star.

After the Steelers January 2017 win playoff win over the Miami Dolphins, Porter was caught in a highly public altercation with a South Side bouncer.

A year earlier, Joey Porter presence on the field while doctors were attenting to Antonio Brown helped prompt Adam PAC Man Jones to touch an official, resulting in a 15 yard penalty, that set up Chris Boswell’s game winning field goal (remember those?) in the Steelers playoff win over the Cincinnati Bengals.