All good things come to an end. So it is with Antonio Brown and the Steelers. After dominating the headlines for the first two months of 2019, the on-going Antonio Brown Soap opera reached the beginning of the end as Antonio Brown met with Art Rooney II and the two sides agreed to seek a trade. 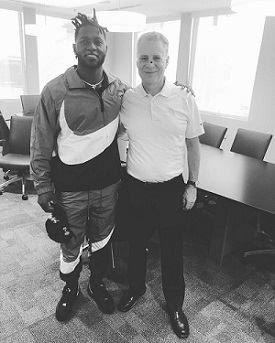 If reports are correct, Antonio Brown first met with Art Rooney II while Brown’s father Eddie Brown was in the room. Once the two sides agreed to a trade, agent Drew Rosenhaus along with Kevin Colbert and Omar Khan joined entered to discuss next steps.

This is important, because it underlines the fact that the Steelers are holding on to one of the key cards they have left to play in this deck – determining where Antonio Brown lands. (Preferably somewhere in the NFC.)

It Sucks, But the Steelers Made the Right Decision

There’s no way to sugar coat it, the Pittsburgh 2019 offense will be poorer for Antonio Brown’s absence. However, this move had to be made, however painful it might be.

While this outrages a lot of fans, the truth is that star athletes get special treatment from a lot of organizations, at all levels of organized sports. But abandoning your teammates in the heat of battle – with the playoffs on the line – simply cannot be tolerated.

Like most fans, when news of this incident broke, I clung to some sort of hope that this would somehow just “all go away.” And the Steelers seemed to leave the door open in early January. Perhaps, in a pre-social media era that might have even been possible.

But it takes two to tango, and nothing Brown has done since walking out on the Steelers prior to the Bengals game indicates he’s willing to do his part of the dance.

Make No Mistake About It: Losing Brown Will Hurt

Antonio Brown is a Hall of Fame talent. Losing him will hurt. A lot.

Rarely can a team make a one-for-one replacement for a Hall of Famer as the Steelers did when they transitioned from Mike Webster to Dermontti Dawson. More often than not, you end up with situations akin to what the Steelers found themselves in the 80s when they replaced Lynn Swann with Louis Lipps or Jack Lambert with David Little.

Sure, Ben Roethlisberger still has JuJu Smith-Schuster and Vance McDonald as weapons. God willing James Washington will develop and James Conner will stay healthy. And, as it has been noted, the Steelers won Super Bowl XL with Hines Ward and Antwaan Randle El and Super Bowl XLIII with Santonio Holmes and Nate Washington.

Just in case you forgot.

Nonetheless, Art Rooney II has made the right decision.

2 thoughts on “Painful? Yes. But Steelers Make Right Decision to Move on from Antonio Brown”