The Steelers soap opera with Antonio Brown continues. In this latest installment, Antonio Brown in the course of about two hours flip flopped from refusing to meet with Steelers President Art Rooney II to agreeing to the meeting “Out of respect” per Ian Rapport’s reporting.

All of it makes for tantalizing social media copy (although one might expect that Steelers PR director Burt Lauten would beg to differ) but it brings up a fundamental question:

Antonio Brown stormed out of Steelers practice either because of a dispute with Ben Roethlisberger or out of Jealousy over JuJu Smith-Schuster winning the 2018 Steelers MVP award and hasn’t been heard from since. Well, maybe, as Antonio Brown’s agent Drew Rosenhaus has indicated there has been some communication.

Antonio Brown’s refusal of phone calls form Art Rooney II, Mike Tomlin and teammates is well documented. Based on Ed Bouchette of the Pittsburgh Post-Gazette’s reporting, the Steelers were already inclined to trade Antonio Brown before Antonio Brown made his trade request this week.

Perhaps this is simple due diligence. After all, it was only two years ago that Art Rooney II signed Brown to a 5 year contract. Perhaps Rooney, as a business man and a leader feels you don’t cut ties without at least talking to Brown face-to-face. No qualms with that. 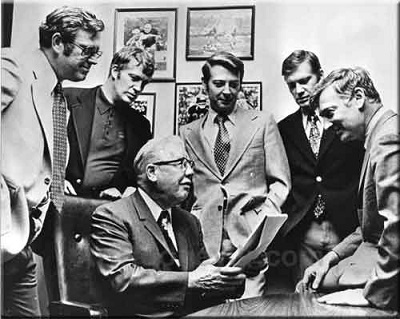 It is also possible that a Rooney-Brown meeting could help facilitate a trade. Brown’s antics, from his domestic dispute to trolling the Steelers on social media, with or without James Harrison, serve as bright red buyer beware flags for every other NFL General Manager to see.

A Brown-Rooney II meeting ending in an amicable divorce with both parties doing and saying all the right things might not increase Brown’s trade value, but it should stop the bleeding.

Its also possible that Art Rooney II wants to meet Antonio Brown because he feels he must exhaust every last possible chance to keep the Hall of Fame talent within the fold. Given all we know, that possibly seems incredibly remote.

But there’s something to be said for meeting a man face-to-face, looking in his eye, and taking his measure. Fair enough.

But should the conversation take a turn towards reconciliation, Art Rooney II would be wise to take to heart the critical piece of advice that Art Rooney Sr. repeated offered his sons: “Never let them mistake your kindness for weakness.”

One thought on “When Art Rooney II Meets Antonio Brown, He Must Keep His Grandfather’s Advice in Mind”