As the saying goes, if I was in an alley fight, and I had to pick a Pittsburgh Steeler to have my back, center Maurkice Pouncey would likely be at the top of my list.

It has been known for quite some time that, in addition to ably filling the footsteps of Ray Mansfield, Mike Webster, Dermontti Dawson and Jeff Hartings by being the latest in a long line of great Steelers centers (seven Pro Bowls and almost certainly destined for immortality in Canton, Ohio, when his career is finally over), Maurkice Pouncey embodies the word “teammate.” 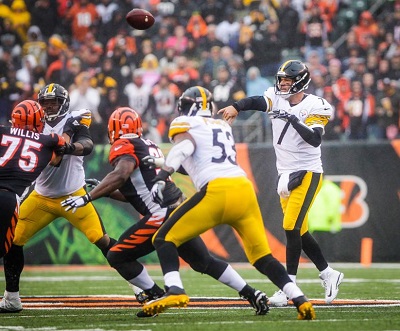 It’s also no secret he’s one of the true leaders of the Steelers locker room, a player that just about every teammate who has known him during his career has respected and admired.

While not as vocal about it as other Steeler greats such as Mean Joe Greene and Hines Ward, there’s no doubt Pouncey has always cared about the Steeler shield–the brand–and makes sure others show the same respect and love for the organization that he does.

At the tail-end of the 2017 season, shortly after legendary outside linebacker and fan-favorite James Harrison was released from the team, Maurkice Pouncey was quick to set the record straight on the sentiment that James Harrison was a victim and treated unfairly.

In fact, Maurkice  Pouncey was the first to speak up and bring to light Harrison’s unprofessional behavior throughout the season–behavior that was spurred on by his frustration over a lack of playing time–that ultimately forced head coach Mike Tomlin to get rid of him.

It’s important to point out that Pouncey later clarified his statement and softened his stance on Harrison’s ultimate legacy in Pittsburgh. But there the Steelers were, in a PR alley fight with James Harrison, the media and the fans, and who was the first person to come to the rescue? Maurkice Pouncey.

Maybe that’s why I’m not surprised Pouncey was really aggressive just last week when his Steelers–specifically quarterback Ben Roethlisberger — were being dragged through the mud by two recent former teammates —Antonio Brown and Le’Veon Bell, both of whom accused Roethlisberger of being the real problem in the Steelers locker room.

“I’ve been with Ben going on 10yr,” Pouncey said on Wednesday via his Instragram page. ” I swear on my kids he is a true leader!! sucks to see players who leave and are mad at the organization now try and point fingers like they are perfect! But this is the world we live in now!”

Will anyone grant Maurkice Pouncey, who, again, has quite the career resume, a national interview to get his positive take on Roethlisberger’s leadership qualities and Pittsburgh’s locker room situation?

Not likely, not when it’s become oh so chic to bash the Steelers on a national level. Not when people take as gospel the words of an All-Pro receiver but not those of an All-Pro center who has been hiking the ball to Roethlisberger for years.

No doubt Pouncey had some issues earlier in his career involving the law and immaturity. He also seemed to alienate the fan base a bit after suffering two season-ending injuries (as if that were his fault). However, Pouncey has not only put to rest his reputation for being injury prone. Much like Rod Woodson, who had some brushes with the law in the early portion of his Steelers career, Maurkice Pouncey has grown into a mature person and, by all accounts, a model citizen.

Fans have always demanded loyalty from their players, which is why the disdain for those who would rather hold out of training camp for more money or go play for another while trashing their previous one is so palpable.