March 2019 marks the date in Steelers history when the Killer Bees came to an end. Ben Roethlisberger remains in Pittsburgh, but Antonio Brown is now in Oakland while Le’Veon Bell is a New York Jet.

But none of the barbs that Brown and Bell are throwing Ben Roethlisberger’s way change the fact that these two Killer Bees left town without fulfilling their purpose – bringing Lombardi Number Seven back to Pittsburgh.

Sports nicknames entrench themselves with fans when they’re both fun and accurate. 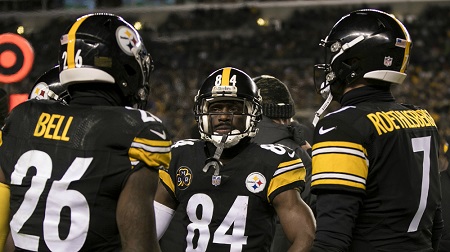 Cincinnati’s Big Red Machine really did churn out division titles, pennants, and championships in machine like fashion. Washington’s “Hogs” really did dominate the line of scrimmage. The Redskin’s “Fun Bunch” was fun.

The “killer bees” or Africanized bees were brought to the Americas in the late 1950’s in an attempt to breed bees that produced more honey. They were originally contained in a secure apiary near Rio Claro, in Sao Paulo, Brazil. But the escaped and headed north!

The phenomenon reached critical mass in popular culture the 1970’s. Although their stings weren’t worse than normal bees, “killer bees” were more aggressive, and more likely to swarm. It was too much for Hollywood to resist.

Several (bad) killer bees movies were shot. If memory serves, a Super Friends episode plot line revolved around the “killer bees.” And I even had to read a story about the coming threat of the “Killer Bees” in one of my elementary school reading books.

Shortly after the Steelers January 2015 playoff loss to the Ravens, a fellow Steelers blogger, who is no homer, sent me a sort of “chin up” email, assuring me that by mid-October the Steelers offense would be “Blowing other teams out of the water.”

Ben Roethlisberger, Le’Veon Bell, Antonio Brown and Martavis Bryant gave Pittsburgh its most potent collection of talent at the skill positions since the days of Terry Bradshaw, Franco Harris, Lynn Swann and John Stallworth. Yet, the later quartet delivered 4 Lombardi trophies; the former delivered none.

As others, such as the Post-Gazette’s Joe Starkey have pointed out, injuries and suspensions are the main culprit behind Steelers Killers failure meet expectations. Ben, Bell, Brown and Byrant only played together for a handful of quarters in 2015. Le’Veon Bell missed games to suspension in 2015 and 2016 and Martavis Bryant missed all of 2016 due to suspension.

Instead, Ben, Bell and Brown only managed 3 complete games and the first quarter of the AFC Championship loss to the Patriots together. They won 2 of those three, and only won 1 of the other 3 contests.

The 2017 Steelers defense was flashing signs of being good, if not very good before injuries to Joe Haden and Ryan Shazier. But of course we know what happened to the defense without Shazier. For whatever else you want to say about the Jacksonville disaster, Antonio Brown, Le’Veon Bell (and Martavis Bryant) did their part.

Its been pointed out that Ben Roethlisberger led the Steelers to victory in Super Bowl XL and Super Bowl XLIII before Bell and Brown even arrived on the scene. Perhaps he can do it again.

But if the trio of Ben Roethlisberger, JuJu Smith-Schuster and James Conner develops a nick name, let’s hope they find one that has a stronger pedigree.