Inside linebacker has been a position of need for the Pittsburgh Steelers since December 4th 2018 when Ryan Shazier suffered a spinal contusion against the Cincinnati Bengals. The injury sent the Steelers scrambling to fill a gaping hole in the middle of their defense. In short order the Steelers have tried:

L.J. Fort was a beneficiary of all of these misfires, because they earned him his first real playing time. How well did he take advantage of that opportunity? The bottom line will reveal itself soon as L.J. Fort reaches free agency. 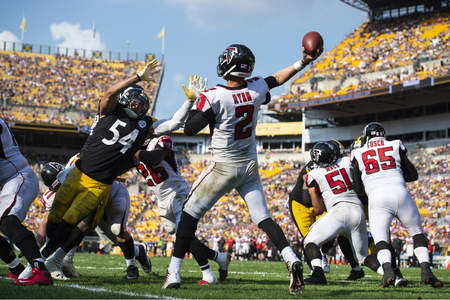 L.J. Fort was an undrafted free agent out of Northern Iowa in 2012 and worked his way through several NFL teams–including the Browns, Broncos, Seahawks, Bengals and Patriots — before finding a more secure home with Pittsburgh in 2015.

After being used mostly as a special teams player during his first few seasons while dealing with a loaded depth chart at inside linebacker — Lawrence Timmons, Ryan Shazier and Vince Williams ate up the majority of snaps in 2016 and 2017 — L.J. Fort began to see more playing time near the end of 2017 in the wake of the tragic spinal injury suffered by Shazier in early December.

2018 was a minor watershed year for L.J. Fort on defense as he saw his playing time increase as the season went along and the Steelers tried desperately to find some way to replace the other-worldly athleticism Shazier once brought to the inside linebacker spot. Appearing in 15 games and starting two, L.J. Fort had his most productive season by far in 2018, recording 48 tackles, a sack and a touchdown in the Steelers win over Atlanta.

The Case for the Steelers Resigning L.J. Fort

While L.J. Fort did turn pro in 2012 and did bounce around the NFL before arriving in Pittsburgh, he only appeared in 18 games prior to 2015. Therefore, despite being 29 years old, Fort likely doesn’t have the wear and tear on his body that another player his age might.

Also, as already alluded to, of all the inside linebackers currently on the Steelers roster, L.J. Fort’s athleticism comes closest to matching that of Shazier’s prior to his injury. Jon Bostic, Tyler Matakevich and Williams certainly don’t possess L.J. Fort’s speed and quickness. In-fact, if L.J. Fort was on another team, and that team was preparing to play the Steelers during Shazier’s prime, L.J. Fort would likely be the guy pegged to emulate him in practice.

And given Fort’s age and limited tape, it’s not likely teams will be lining up for his services. In other words, the Steelers could and probably should resign him at a very team friendly price.

The Case Against the Steelers Resigning L.J. Fort

While L.J. Fort does possess potential, the fact that it still has yet to be realized at this stage of his career may be quite telling. Besides, it’s not all that uncommon for an NFL player to look pretty good in limited playing time, before getting exposed as a starter. Fact is, the Steelers thought so little of L.J. Fort’s abilities after Shazier’s injury in late 2017, they signed Sean Spence off the streets and started him in the disastrous divisional round playoff game against the Jaguars.

Curtain’s Call on the Steelers and L.J. Fort

In reality, it is highly unlikely at this point of his career that L.J. Fort is still some diamond in the rough who will suddenly morph into a dominant linebacker in his 30s a la James Harrison.

Even if the Steelers go out and sign one of the prime free agent inside linebackers or draft one in the first round, there should still be room on the depth chart for L.J. Fort. And, again, considering the price it would likely take to keep him, I think it’s a no-brainer that L.J. Fort stays with the Steelers in 2019.