The Steelers have made the trade! No, not THAT trade, the one involving Antonio Brown. Instead the Steelers have traded offensive tackle Marcus Gilbert to the Arizona Cardinals for a 6th round pick in the 2019 NFL Draft.

Marcus Gilbert missed the last 11 games of the 2018 season due to injury after missing nine games during 2017 due to injury and suspension. Gilbert was in the final year of the contract he signed in 2015 and was due to make $4.9 million dollars, and it has been speculated that Marcus Gilbert could be a cap casualty.

That speculation turns out to be correct. 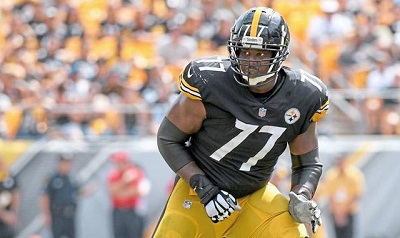 Marcus Gilbert starting for the Steelers vs the Chiefs in 2018. Photo Credit: AP, via Tribune Review

The day was September 11th, 2011, the venue was Baltimore’s M&T Bank Stadium and the result was one of the most humiliating defeats of the Mike Tomlin era. After defeating the Baltimore Ravens in 4 straight contests, including 3 in 2010, the Ravens struck back decimating the Steelers in the Debacle in Baltimore.

During the game the Steelers lost Willie Colon for the year as the starting offensive tackle tore his triceps. The Steelers had played “Plug and Patch” on their offensive line up until that point in the Tomlin era. Many assumed the Steelers would look to either resign Max Starks or Flozell Adams, both of whom had been with the club in 2010 and cut during the summer.

The Steelers would again take the Red Phone to Max Starks, but that move came in October, when it became clear that Jonathan Scott was in over his head and woefully unable to protect Ben Roethlisberger’s blind side.

The Steelers instead announced that Marcus Gilbert would start at right tackle. The decision was important because it signaled the Steelers commitment building a sustainable offensive line. And while injures kept him off of the field for much of 2012, he’s held down the position ever since, aside from rotating with Kelvin Beachum for a bit during the beginning of 2013.

And while that commitment continues, trading Marcus Gilbert ends a phase of that cycle.

Marcus Gilbert deserves to be remembered as a player who provided the Pittsburgh Steelers with quality play at right tackle, helping stabilize a position and an offensive line that had under gone tremendous turmoil during Mike Tomlin’s first 4 or 5 seasons.

During the 2012 preseason, Marcus Gilbert fell on David Johnson and David DeCastro, injuring both men and costing David Johnson the season in which he was to transition to becoming a full time fullback. Later on, during the 2015 season, Marcus Gilbert landed on Landry Jones, ending the young quarterback’s first start after just a handful of snaps.

As the Steelers learned during the first half of the Mike Tomlin era, “You can never have enough good offensive lineman.” And $4.9 million dollars, is not a lot of money to pay a quality offensive tackle.

But Matt Feiler did an excellent job of filling in for Gilbert in 2018, as did 2018’s 3rd round pick Chukwuma Okorafor. The Steelers will also bring back 2016’s 4th round pick Jerald Hawkins.

Steel Curtain Rising would like to thank Marcus Gilbert for 8 years of quality play for the Pittsburgh Steelers and wishes him well with the Arizona Cardinals.