A lot of things haven’t gone right for the Pittsburgh Steelers. After knocking on heaven’s door against New England in the 2016 AFC Championship nothing has gone Pittsburgh’s way.

Room temperature meant needing Cleveland to beat Baltimore to make the playoffs, and the Browns blew it. Then news broke that Antonio Brown had quit on his teammates before the season finale against the Bengals. Then Antonio Brown proceeded to humiliate the team on social media, ultimately forcing the team to take fire sale value in a trade with the Raiders.

The national media has decided to pile on Pittsburgh to the point where Josh Harris (who?) gets a national platform to dump on Ben Roethlisberger. Just how far reaching is this pile on? Well Josh Harris’ claim ignited two days of parallel debate on both Mexican and Argentine Steelers WhatsApp groups.

The Steelers wisely decided not to slap the transition tag on Le’Veon Bell. That ended or at least signaled the end to that story. Then they gained come vindication to when Le’Veon Bell signed for less money than they’d offered him a year ago. And they’ll still have James Conner at a fraction of the cost.

One by one they’ve signed Steven Nelson, Donte Moncrief and Mark Barron. Objectively speaking, each of those moves make them stronger today and gives the flexibility in the 2019 NFL Draft. However, it is wise to be a little wary.

Art Rooney Sr. warned his sons against “Putting on the dog. ” The Steelers recent history with splash free agency moves haven’t gone so well. See the tenures of Mike Mitchell and Ladarius Green. The Steelers aggressiveness is satisfying this spring, but those signings must not fall short come autumn. Time will tell.

And that player is Ryan Shazier. Last week the NFL announced that Ryan Shazier’s 2018 contract was tolled, or rolled into 2019 because he didn’t play the requisite games to qualify for a full year of service. This is an administrative decision made under the terms of the CBA. 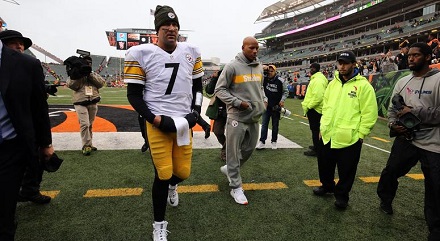 Not that it matters to the Steelers. At the 2019 NFL Scouting Combine Kevin Colbert made clear the Steelers were going to keep Ryan Shazier on their 2019 roster regardless of whether the NFL tolled his contract or not.

The Steelers are making sure they do what they can to take care of Ryan Shazier. They could have given him a coaching or front office job, but by keeping him on as a player, Ryan Shazier gets access to better health care, another year of pension accrual, and access to all the other benefits that an NFL player enjoy.

After enduring several months when so much seemed to go wrong for Pittsburgh, Steelers are doing right by Ryan Shazier and that is fundamentally a good thing.