“Be aggressive!” Appears to be the mantra free agency mantra of the Pittsburgh Steelers in 2019 as they continued to bolster their defense by signing former Los Angeles Rams linebacker/safety Mark Barron.

If initial reports are correct, Mark Barron’s contract with the Steelers is for two years and 12 million dollars with a $5.75 million signing bonus.

While “Mark Barron” is far from a household name he does have some history with the Steelers, as he was responsible for hit that injured Ben Roethlisberger in the Steelers 2015 win over the then St. Louis Rams. Although Barron’s hit was clearly against NFL rules, he was neither flagged nor fined for the transgression. 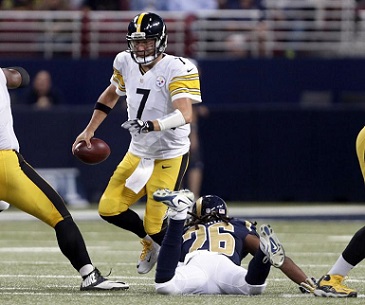 As a result of the play, Mike Vick was forced to start 3 games in Ben Roethlisberger’s absence, with Landry Jones relieving Vick and rallying the team to a comeback win over Arizona.

Mark Barron entered the NFL as a safety, until they traded him to the Rams in mid-2014, who moved him to inside linebacker. Like some other recent free agent signings from past off seasons, Mark Barron comes to Pittsburgh with some injury history, having missed the first four games of 2018, before starting the final 12 including the Rams 3 playoff games.

This could spell bad news for Jon Bostic, who figured to be the incumbent starter following L.J. Fort’s free agent defection to the Philadelphia Eagles. The move could also signal a coming release of Morgan Burnett, whom the Steelers signed as a safety last season.

The Steelers plan was to start Morgan Burnett at safety, but injuries led to Terrell Edmunds getting the start, and Edmunds played well enough to keep the strong safety spot for the balance of the season. Morgan Burnett did work his way into the lineup, but as a dime linebacker, a move which prompted Burnett publicly request his release.

Although the Steelers have now made high-profile free agent signings at inside linebacker, cornerback and wide receiver, Pittsburgh is expected to target all three positions in the 2019 NFL Draft.  The moves however, frees Pittsburgh from the need to reach to fill any of the areas on their depth chart.

Today you could say, “When you draft for need, Jarvis Jones or Artie Burns happen.”

Word to the Wise: Official Word on Barron Signing Pending

A quick word to the wise:  News of the Steelers signing Mark Barron broke on Twitter on Sunday the 17th. By Monday the Post-Gazette and Tribune Review were running the story, seemingly having confirmed Adam Schefter’s report on ESPN.

While the delay is likely due to logistical issues, it is possible that the deal hit a snag. Back in 2008, the Pittsburgh Post-Gazette announced that the Steelers had signed Bud McFarland. That deal never materialized. However, in that case the Tribune Review had clearly and consistently reported that no deal had been reached with Bud McFarland.