NFL “Street Free Agents” are just what the name implies. Players who get signed off of the street. Steelers General Manager Kevin Colbert has a pretty good record when it comes to signing Street Free Agents. Kickers Matt McCrane and Randy Bullock provide to recent examples.

Stevan Ridley is another one of Kevin Colbert’s Street Free Agent signings and his impending free agency provides a good time to assess how well the Stevan Ridley reclamation project has worked. 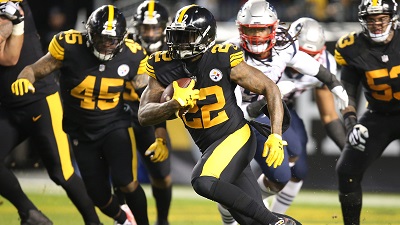 When James Conner got injured in the infamous Steelers 2017 loss to the Patriots, the infamous Jesse James game, Fitzgerald Toussiant was Le’Veon Bell’s only experienced backup. Kevin Colbert wasted little time signing Stevan Ridley who’d been a quality NFL running back before injuries derailed his career in 2014.

Stevan Ridley saw immediate action in the Steelers Christmas win against the Texans and in their season finale against the Browns. The Steelers resigned him in the 2018 off season, and Ridley began the 2018 season as James Conner’s primary backup, ahead of Jaylen Samuels.

Ridley only got 29 carries and saw 3 balls thrown his way, managing a 2.8 yard per carry average. Worse yet, he fumbled twice.

Those statistics don’t paint a pretty picture for Stevan Ridley, and make it hard for build a case for bringing Ridley back to Pittsburgh. On a recent Post-Gazette chat, Gerry Dulac quipped to a reader that Ridley “led the league in 2 yard carries.”

Depth in the NFL is about quality not quantity. Stevan Ridley is going to be 30 next season, and 30 year old running backs don’t offer much in the way of “upside.”

It is hard to justify a modest signing bonus and even a roster spot on Stevan Ridley when the Steelers should be looking to fill that role with a young player for the 2019 NFL Draft.

Stevan Ridley’s future in Pittsburgh could largely depend on the Steelers overall approach to building their running back depth chart.

For the last several seasons, the Steelers have opted to go with a starter, a competent backup and untested younger player manning the third running back slot with Roosevelt Nix rounding out the group at fullback.

If the Steelers stick to form, and only carry 3 running backs plus a fullback, it would be a mistake to keep Stevan Ridley as that third running back. However, if the Steelers find a good back to complement James Conner and Jaylen Samuels, a 2019 equlivent of 2008’s Mewelde Moore, than Stevan Ridley could be a good candidate to occupy that 4th slot, much as Gary Russell did in 2008.

However, with Antonio Brown set to leave town, the Steelers will need to add extra bodies at wide receiver to supplement JuJu Smith-Schuster, James Washington and possibly Eli Rogers as targets for Ben Roethlisberger.

That being the case, it is likely that the Steelers Stevan Ridley reclamation project has come to an end.