Accentuate the positive: It is over.

Long before the Art Rooney II met with Antonio Brown, it became clear that the Steelers would trade their Hall of Fame talented wide receiver. And now that process is finally over as the Steelers trade Antonio Brown to the Oakland Raiders for a 3rd round pick and a 5th round pick in the 2019 NFL Draft.

For both better and for worse, the soap opera is finally over. 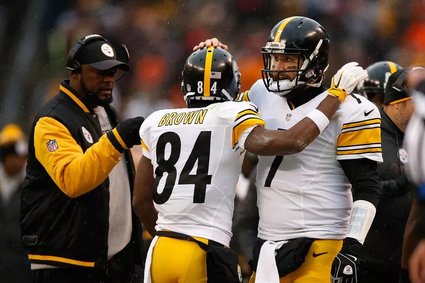 What a Long Strange Trip Its Been

The story began back in December. During the Steelers heart breaking loss ot the Saints, thanks in no part to two bogus pass interference on Joe Haden, Antonio Brown had been on fire. Ben Roethlisberger threw 19 passes his way, as Brown caught for 185 yards and two touchdowns.

Then, Jim Wexell mentioned that Randy Fichtner had begun his press conference with a preemptive “I’m NOT talking about Antonio Brown.” Antonio Brown didn’t play. The Steelers came out and struggled to beat the Bengals, despite the return of James Conner.

Shortly after the game (perhaps news leaked sooner) reports surfaced that Antonio Brown had walked out of Steelers practice due to an altercation with Ben Roethlisberger during practice.

Mike Tomlin informed us that Antonio Brown ignored phone calls, although Drew Rosenhaus made calls to the coach. Mike Tomlin didn’t dispute a report that Brown had abandoned the team during its “Darkest hour.” Art Rooney II pulled no punches with reporters admitting that it was “Very hard to see” Antonio Brown returning to the team.

Meanwhile, Antonio Brown proceeded to troll the Steelers at every turn on social media, mocking Mike Tomlin alongside with James Harrison during Tomlin’s press conference, photo shopping himself into San Francisco 49ers uniforms and otherwise acting like a buffoon.

Yet, through it all, Antonio Brown managed to sway a good chunk of the national media to his side.

No, never mind any of that. Some how in the eyes of many in the media (Cris Carter excluded) Antonio Brown was a victim of a series of injustices leveled on him by Ben Roethlisberger, Mike Tomlin, Kevin Colbert and even Art Rooney II.

Antonio Brown Trade Robbery or Riddance for Steelers? How about Both?

The Steelers had done their part to try to keep the door open to Brown’s return, with players like JuJu Smith-Schuster, Maurkice Pouncey and Cam Heyward treating Antonio Brown with open arms to one degree or another in the press.

But it became pretty clear early on that question wasn’t “If” the Steelers would trade Antonio Brown but “How much will they get?”

I guess what goes around comes around. Last spring during the 2018 NFL Draft, the Steelers shipped troubled wide receiver Martavis Bryant to the Oakland Raiders for a 3rd round pick. Given that Bryant was one bong hit away from NFL oblivion it seemed like Kevin Colbert had gotten away with robbery.

Antonio Brown is a Hall of Fame talent. While Brown did suffer a slow start to 2018, he was in Hall of Fame form when the season ended. He is the best receiver in the game and showed no sign of slowing down. He had a team-friendly contract.

Yes, of course the Steelers got a 5th on top of that, but when considering Brown’s talent that’s the equivalent of saying “A third round pick and two box tops.”

However, this is hardly a surprise. In early January Jim Wexell reported that a team source had told him that a 3rd rounder might be the best they could do for Brown. Ed Bouchette had other NFL personnel men tell him that a 6th or a 5th might have been the best the Steelers could do.

In pure football terms, the Steelers got robbed. However, the Steelers did what they had to do. Perhaps, just perhaps, in early January there was a bridge that Antonio Brown could have taken back to Pittsburgh.

At the end of the day, the Raiders may have robbed the Steelers, but the Steelers also rid themselves of locker room cancer that would have scuttled their 2019 season before it started.

2 thoughts on “Steelers Trade Antonio Brown to Raiders for 3rd & 5th Round Picks – Robbery or Riddance?”