For every NFL rookie that gets a dreaded visit from The Turk, a practice squad slot equals a lifeline to their NFL dream.

In the case of Pittsburgh Steelers practice squanders, on the one end of the spectrum you have James Harrison who worked his way to NFL Defensive Player of the Year.

On the other hand, you have many more players like Shakim Phillips, who made the Steelers 2015 practice squad, got in invitation back to St. Vincents the next summer where his NFL dream ended. In between you get players like:

Xavier Grimble is a player who cut his teeth on the Steelers practice squad, an experience which he parlayed into an active roster spot. Now that he’s reached restricted free agent status, his spot on the continuum above will come into clearer focus. 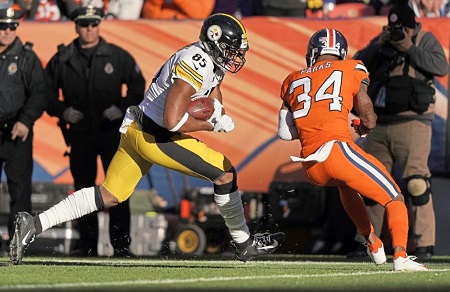 After spending time with the Patriots and the 49ers as an undrafted rookie free agent in 2014, Xavier Grimble joined the Steelers practice squad in 2015. In 2016 Xavier Grimble earned a slot on the Steelers active roster behind Jesse James and David Johnson while Ladarius Green sat out in the PAP list.

That was true of Matt Spaeth. Entering the 2015 off season, Matt Spaeth had only caught 53 passes, but 10 of those, or just under 20% went for touchdowns. Xavier Grimble is on a similar path as he has caught 22 passes but three of those have been for touchdowns.

Of course the play that most fans are going to remember is the goal line fumble against Denver where Grimble initiated contact unnecessarily (while holding the ball incorrectly) which cost the Steelers the game, if not the playoffs.

The Case for the Steelers Resigning Xavier Grimble

But arguably,  Xavier Grimble has already contributed more than Preston Gothard did as starting tight end for some mediocre teams in the 80’s.

Is Xavier Grimble worth the 2 million plus it would take to offer him a restricted free agent tender? Well, if Jesse James is playing elsewhere in 2019, then the answer might be yes. Even if Jesse James is back, the Steelers would be wise to keep keep this valuable backup in Pittsburgh.

The Case Against the Steelers Resigning Xavier Grimble

Practice squad to regular season roster stories may warm the soul, but don’t spontaneously sprout Lombardi Trophies. Sure, Xaiver Grimble is a decent number 3 tight end, but at age 27 he’s reaching the “What you’ve seen is what you’re going to get” phase of his career.

With the Steelers facing the loss of Antonio Brown and Le’Veon Bell, Ben Roethlisberger is going to need dynamic targets to take heat off of JuJu Smith-Schuster and Vance McDonald.

No. Even if Grimble makes it to training camp, there’s no assurance he’ll beat out Jake McGee for a roster spot. The Steelers would be better off parting ways with Grimble and bringing in a younger player who offers more promise.

Curtain’s Call on the Steelers and Xavier Grimble

Jesse James’ free agent profile has yet to be published, but I’m going to go ahead and scoop myself and say that the Steelers should resign Jesse James and provide a solid number 2 behind Vance McDonald.

Under that scenario, with Jesse James locked up for 3-4 years, the idea of spending the 2 million plus to put a qualifying restricted free agent tender on Xavier Grimble sounds like salary cap insanity.

However, Kevin Colbert’s comments at the NFL Scouting Combine indicate that the Steelers will probably let Jesse James test free agency. That makes Xavier Grimble a more valuable commodity to the Steelers, but perhaps not valuable enough to warrant a restricted free agent tender.