The picks are in. Coaches have held their press conferences. New players have done their photo ops. The latest installment of the NFL draft is history. Now it is time to grade the Steelers draft class.

Instant draft grades are as understandable as they are ridiculous. The NFL Draft IS the day when teams alternatively forge Super Bowl rosters or cement status as pretenders instead of contenders. The desire to evaluate such a momentous in real time is logical.

Just how long is a matter of opinion. Certainly you can start drawing a lot of meaningful conclusions after 4 or even 3 years. But Chuck Noll always used to say it took five years, and if that was good enough for the Emperor, who am I to argue? With that, we gladly grade the Steelers 2014 Draft Class. 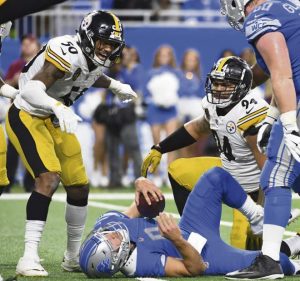 If ever you sought an argument against drafting for need, look no further than Ryan Shazier. By the time the 2014 NFL Draft rolled around, the Steelers depth chart at inside linebacker wasn’t exactly strong, but it was solid. Certainly, the Steelers had more glaring needs (like cornerback.)

And they were right. Ryan Shazier’s overall career statistics (7 sacks, 7 interceptions, 7 forced fumbles) might look pedestrian, but what those numbers don’t show is the timeliness with which Shazier made those plays.

Whether it was forcing a fumble in the playoffs against the Bengals, grabbing an interception against the Colts or making another play at the right time, Ryan Shazier was broaching Troy Polamaluesque lay making ability before suffering the spinal contusion that has most likely ended his career. Grade: Grand Slam 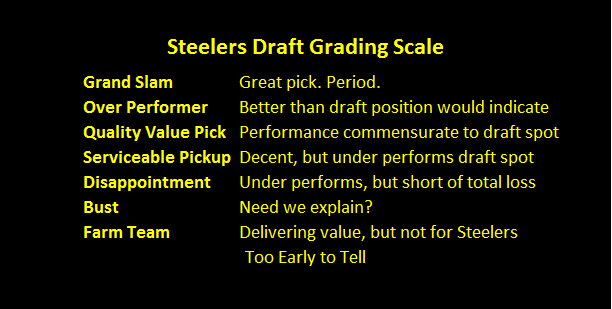 When the Steelers picked Stephon Tuitt in the 2nd round fate appeared to have stacked the deck against the rookie. The Steelers had a long history of drafting defensive lineman in the 2nd round that blossomed into busts, and they hadn’t had much luck of late in drafting players from Notre Dame.

Tuitt broke into the starting lineup as a rookie because of Brett Keisel’s injury and began making an immediate impact. He built on that in his “sophomore” year, was limited a bit in his next two years by injury, yet had his best year yet in 2018. Grade: Grand Slam.

What a double whammy. This is one that Kevin Colbert and Mike Tomiln wanted back two times over. In the 2013 NFL Draft the Steelers traded away their 2014 3rd round pick to move up to draft Shamarko Thomas, in part because they expected to get a 3rd round compensatory pick in 2014.

The Steelers thought to use Dri Archer as a utility back while working him in as a wide receiver. They also wanted him to return kicks. It quickly became clear he could do none of the above. Dri Archer was so bad that when Le’Veon Bell suffered an injury before the playoffs, the Steelers had to go out and sign Ben Tate off of the couch. Grade: Bust

Martavis Bryant is an interesting pick to grade. Clearly he is one player who never lived up to his potential, yet as a 4th round pick, with all of his issues, Martavis Bryant delivered decent value.

After coming back from his suspension, Martavis Bryant didn’t make many game breaking plays but started making critical 3rd down catches late in the season. And, while this shouldn’t impact a draft grade, strictly speaking, the Steelers actually got a 3rd round pick for Martavis Bryant, and one that they used to draft Mason Rudolph, a potential starter.

Not bad value for a 4th rounder that you essentially took a flyer on. Grade: Quality Value Pick.

The Steelers drafted Wesley Johnson in the 5th round of the 2014 NFL Draft, and the young man made the roster, which was no small accomplishment for an offensive line which was already becoming deep. Unfortunately, injuries force the Steelers to cut Johnson with an eye towards putting him on the practice squad.

Since then, Wesley Johnson has appeared in 53 NFL games and started 24. Not bad for a 5th rounder. Grade: Farm Team

Sometimes injuries end NFL careers before they get started. Such is the case with Jordan Zumwalt. The Steelers put him in injured reserve during preseason of his rookie year. They designated him injured/waived in 2015, but took him back when no one else claimed him. They gave him another shot in 2016, but ended up cutting him.

It is hardly fair to label someone like that a Bust, but the Steelers didn’t get any value out of this pick. Grade: Bust

At first glance, a guy as big as Daniel McCullers shouldn’t be able to fail on the football field. Yet Daniel McCullers saw a decent amount of action as a rookie, and then saw his snap count dwindle year after year.

The Steelers surprised by resigning Daniel McCullers in 2018, and then again in 2019. Still, it is hard to label Daniel McCullers NFL career as anything other than what it has been. Grade: Disappointment

Labeling a 7th round draft picks as a “bust” is a bit harsh. Yet the career paths of Brett Keisel and Kelvin Beachum serve as a reminder 7th round picks can become good players. Rob Blanchflower earned a spot on the Steelers practice squad in 2014, and got invited back to camp in 2015 but got cut at the end of summer. Grade: Bust

Overall Grade for the Steelers 2014 Draft

In 2014 the Steelers had the 15th draft position, tying 2007 for the best draft positioning Pittsburgh has had since 2004, when they picked Ben Roethlisberger. Just like 2007, the Steelers made excellent picks in the first two rounds, and made a solid pick in the 5th round, albeit one that other teams are benefiting.

Their 4th round pick had issues, but delivered value. And their 6th round pick is still in the league. Overall Grade: B+