Since the end of the 2019 season, the questions involving the “broken” Pittsburgh Steelers have been abundant. How can they get back to the old “Steeler Way?” How can Art Rooney II, Kevin Colbert and Mike Tomlin fix this broken situation, this national embarrassment?

At least when it comes to their sources of bad PR.

I look in my pretend pocket, and I find two receipts. One documenting the trade of receiver Antonio Brown to the Raiders in exchange for a third and a fifth-round draft pick. The other one is for the transaction that allowed running back Le’Veon Bell to simply waltz into free agency and get the multi-year contract he always wanted–or at least get a multi-year contract with the Jets. 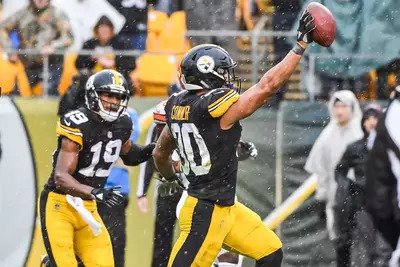 The way I see it, Brown and Bell–often dubbed the “Toxic Twins” by both the media and the fans–were the headline acts of the circus that had been the Steelers the past few seasons.

Brown and Bell were responsible for a great percentage of the non-football related questions — those so-called “distractions”–their teammates had to answer the past few years.

I’ll tell you what they can do, they can draft people of higher character, something that has become a reality over the past few seasons. By selecting players like Sean Davis, Javon Hargrave, T.J. Watt, JuJu Smith-Schuster, James Conner, Terrell Edmunds and James Washington in recent years, Pittsburgh is clearly trying to organically change the culture of its locker room.

This new draft philosophy is something that’s not unique to Pittsburgh, either.

Mostly gone are the days when a team like the Rams would trade its franchise running back — Jerome Bettis — in order to make room to draft another running back — Lawrence Phillips — who was accused of the heinous crime of physically assaulting a woman.

Today, if there’s even a whiff of poor character coming from a prospect’s draft camp, that player’s stock is likely to plummet to the point where he may not even be selected.

No, this recent phenomenon of targeting great players with great character is not unique to the Steelers, but they have clearly hopped on board in a very noticeable way.

Again, what more can be done? Do you want the people of authority to take a more disciplined, hard-line approach to running the team? Do you want Mike Tomlin, who has always been known as a coach who likes to treat his men like men, to become someone he isn’t?

Or do you trust that these young men of great character will grow into veteran players who know what it takes to be responsible professionals, people who won’t embarrass the organization on a local or national level?

Or, maybe, when talking about the “broken” Pittsburgh Steelers, you’re really referring to a lack of Super Bowl titles for the past decade. “If the Steelers were just a little more disciplined, they’d win it all,” is a popular sentiment among the faithful looking for reasons for their team’s failure to win that One for the Other Thumb.

The 2019 Pittsburgh Steelers are no longer a broken organization, in my opinion–at least, as it pertains to having players in their locker room who will bring them bad publicity.

Are they now fixed to the point where they’ll be able to win a title without two very talented problem children?

That, of course, remains to be seen.