The 2019 NFL Draft is just hours away and when it does the Pittsburgh Steelers will have already logged one of the most unusual off seasons in franchise history.

The latter point is the one that is most relevant one to keep in mind. A year ago the Steelers responded to the playoff disaster against Jacksonville by making piecemeal moves in free agency, and defying the critics and going offense heavy in the 2018 NFL Draft. 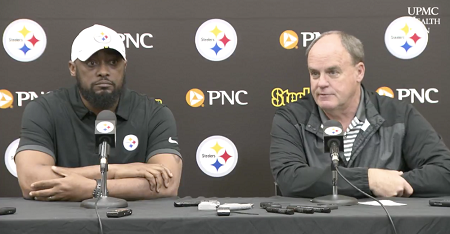 Whether the freshly signed free agents turn out to be the next Ladarius Greens and Mike Mitchells or the next James Farriors and Ryan Clarks isn’t relevant tonight. What is relevant is that the Steelers have inoculated themselves against having to reach to fill need in with one of their premium picks.

And just what are the Steelers needs heading into the 2019 NFL Draft?

Over the last month, with a whale of an effort from staff writer Tony Defeo, Steel Curtain Rising has broken down the Steelers need on a position by position basis. Now that all is said and done, the Steelers areas of need break down into 3 tiers.

At the top you have cornerback and inside linebacker identified as areas of High-Moderate need, followed by wide receiver and running back which clock in at Moderate-High.

In the middle tier, you have tight end, defensive line, outside linebacker and safety which are of Moderate need.

There’s a lot of clustering there, so how do we break the ties? For that you have our annual Steelers 2019 Draft Need Matrix.

The premise of the Steelers draft needs matrix is simple – it is a guide to who the Steelers should pick in the event their on the clock and have two or more players with the same grade on them. Here is the Steelers 2019 Draft Needs Matrix: 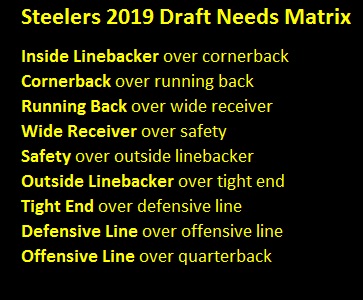 Running back will surprise many. And so it should. James Washington is the X factor in the quest to replace Antonio Brown. If he pans out as reporters and coaches assure use he will, the Steelers will be OK. If not, the Steelers will fall hard this autumn.

However, as is the case with inside linebacker and cornerback, the Steelers have more bodies at wide receiver than they do at running back. We’ve written time and time again how a dearth of running back depth as derailed the Steelers in December. Adding a third running back to play along side James Conner and Jaylen Samuels could go a long way to rectifying that chronic problem.

Wide receiver beats safety because of the above mentioned X factor and the simple reality that Ben Roethlisberger no longer has a Hall of Fame talent to target. Safety trumps outside linebacker because Anthony Chickillo has shown he can contribute at a far greater level than Marcus Allen or Jordan Dangerfield.

Tight end beating out defensive line is a no brainer. The Steelers could use more depth at defensive line, but they’re OK there. But defensive line depth clearly outshines the need to use a mid or even late round pick on a quarterback for a third straight year.

Who will the Steelers pick in the first round? Will Devin Bush fall to him, or will Kevin Colbert engineer his first day one draft trade since picking Troy Polamalu in 2003? Or might they look to corernback, and draft Rock Ya-Sin, Bryon Murphy, or Greedy Williams? Or perhaps they’ll tap a safety again, such as Justin Thronhill or Darnell Savage?

But every boy who ever wrapped his hands around a Nerf football and yapped out a bogus snap count has dreamed of playing in the NFL. And for a few hundred young men, that dream is about to become true. Let’s give those young men their day and wish the good luck and God speed in the NFL.