Throughout much of the Tomlin era, and especially in over the past several seasons the Steelers, sometimes by chance and sometimes by choices, have skimped out on running back depth and it has cost them dearly in December.

Although he scored 25 touchdowns, averaged 5.3 yards per carry and ran for just under 2,000 yards in two seasons for the Wildcats, Benny Snell performed poorly at the Combine, he had a 4.66 40 time, prompting some pre-draft analysts to take them off of their draft boards. Even his hometown paper concluded that Snell failed to help himself at the Combine. 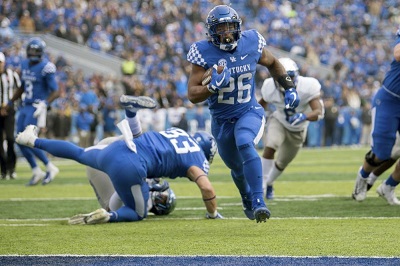 Here is a look at Benny Snell’s NCAA Highlight tape:

Clearly, Benny Snell likes to score touchdowns. In Pittsburgh Snell joins a backfield headed by James Conner and Jaylen Samuels, both of whom exceeded expectations in 2018. The Steelers also have Trey Edmunds, brother of Terrell Edmunds, on their roster, although Edmunds has never seen an NFL snap.

During the 2018 season the Pittsburgh Steelers passed more than any other NFL team as Ben Roethlisberger threw 675 passes, far more than he’s ever thrown before.

While many commentators criticized Mike Tomlin and Randy Fichtner for abandoning the running, the imbalance in the Steelers offense began when it became clear that Le’Veon Bell would hold out for the entire season.

That was the first sign that the Steelers brain trust realized that they take a differ approach to how they deployed their running backs. The decision to draft Benny Snell is a second sign and a step in the right direction.