The Pittsburgh Steelers closed the 2019 NFL Draft by picking Derwin Gray an offensive lineman from the University of Maryland.

While it is tempting to writer off a 7th round offensive lineman as someone whose NFL dream rides on earning a practice squad spot, it was only in the 2012 NFL Draft that the Steelers ended up picking Kelvin Beachum, who was starting games at both guard and tackle before the season was over.

Indeed, at lot of thing would need to go wrong for Derwin Gray to find himself protecting Ben Roethlisberger and/or opening holes for James Conner and Jaylen Samuels. The Steelers are set with David DeCastro and Ramon Foster as their starters, with B.J. Finney entrenched as their top backup on the interior of the offensive line. 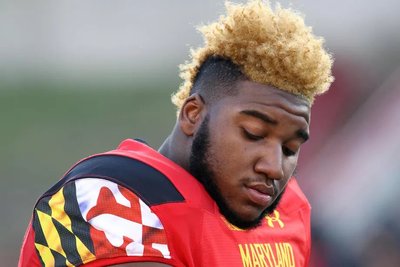 Beyond that, the Steelers have Matt Feiler who started 11 games for the Steelers at right tackle. With Marcus Gilbert now in Pittsburgh West aka Arizona, Matt Feiler is expected to battle Chukwuma Okorafor for the starting spot there.

While the Steelers depth chart appears to be loaded with both quality players from end-to-end, you can never have enough good offensive lineman. Steelers coach Mike Tomlin confirmed that the Steelers will work Derwin Grey at both at guard and tackle.

Even late round offensive lineman have their own highlight tapes, and Derwin Grey is no exception: