The Steelers stuck with defense with their 2nd 6th round pick in the 2019 NFL Draft as they took Isaiah Buggs a defensive tackle out of Alabama. The Steelers decision to draft Isaiah Buggs reunites him with defensive line coach Karl Dunbar, who had coached at Alabama prior to replacing John Mitchell in Pittsburgh.

Cam Heyward, Stephon Tuitt and Javon Hargrave remain entrenched as the starters. Tyson Alualu’s status as the “next man up” likewise remains intact. But the Steelers have very little depth behind those four. Currently the only veteran under contract is Daniel McCullers, a man who can best be described as a roster bubble player. 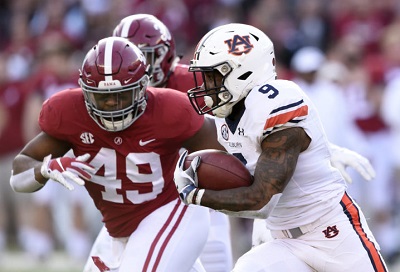 During 2018 the Steelers also carried L.T. Walton on their roster, but thus far Pittsburgh has not opted to resign their backup defensive tackle, and the decision to draft Isaiah Buggs would seem to eliminate that possible.

Over the last two seasons Isaiah Buggs has appeared in 18 games for Alabama, amassing over 100 total tackles, 17.5 of which went for losses. He’s also shown an ability to rush the passer, having made 11 sacks during his time at Alabama, with 9.5 of those coming in 2018. He also recovered 1 fumble and deflected 3 passes.

Here is a look at Isaiah Buggs highlight reel:

Agents of course cherry pick their client’s video to compile these highlight reels, but even keeping that in mind it is a bit surprising that Isaiah Buggs last until the 6th round, although the minior injury he suffered in the Iron Bowl, could be one possible explanation.

Regardless, this young player would appear to have an excellent shot at making the Steelers 53 man roster, based on simple depth chart math.