It must have been déjà vu all over again in the Steelers draft room during the 5th round. Except this time it wasn’t a surprise. Four years ago when it came time for the Steelers to pick, they drafted Jesse James.

The move counted as a bit of a surprise, as Heath Miller was still going reasonably strong, and the team had just resigned Matt Spaeth. The move turned out to be a wise one, as Heath Miller retired in after the 2016 season, and injuries to Ladarius Green and Vance McDonald made Jesse James the defacto starter at tight end in 2016 and 2017.

Instead, the Steelers drafted inside linebacker Devin Bush, wide receiver Dointae Johnson, cornerback Justin Layne, and running back Benny Snell before turning to Zack Gentry in the 5th round. 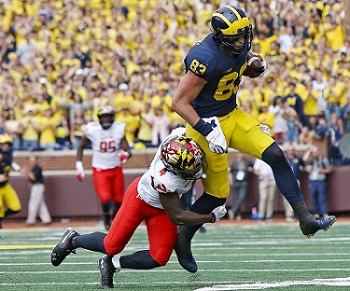 With his size and background at Michigan, teams might be tempted to play him as a combination tight end with run-blocking duties, but he’s much better-suited in space than in the trenches. Gentry runs pretty well and moves fluidly as a route-runner, but his hands and focus can be maddening. He showed flashes of what he could do with a more capable quarterback last year, but his disappointing workouts and testing might have pushed back and out of the draft.

Is is the case with Dontae Johnson and perhaps Benny Snell, the Steelers appear to value Zack Gentry a little more highly than do the pundits.

Zack Gentry actually played quarterback during his freshman year for the Wolverines, sat out 2016 presumably due to injury, and was back as a tight end in 2017 and 2018. During that time he caught 49 passes for four touchdowns.

Here is a look at some of his highlights:

IF nothing else Zach Gentry appears to have good hands. Welcome to Steelers Nation Zach Gentry.