The Steelers started OTAs this week and as expected, little real news was to be had, save for the report that the Steelers are trying out Sutton Smith at running back.

But the real take away from Steelers OTA’s really didn’t shed light on anything new, but rather reaffirmed a truth everyone in Pittsburgh already knew:

You know the drill by now. With the Steelers in a must-win situation to make the playoffs, Antonio Brown took umbrage at Ben Roethlisberger when he wanted to re-run a play during a walk through, and then went AWOL on his team. 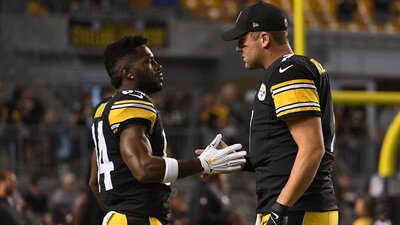 Maybe Antonio Brown was upset that JuJu Smith-Schuster had won the MVP award. Maybe it was all a Drew Rosenhaus ploy to get his client more money. We don’t know and we’ll probably never know for sure.

Ben Roethlisberger had an “owner’s mentality.” Antonio Brown begun spinning the yarn, and the national media was only too happy to join in. Rashard Mendenhall called Ben a racist. Josh Harris, that erstwhile authority on all things Steelers, he of the 9 NFL carries, accused Ben Roethlisberger of fumbling intentionally to make Todd Haley look bad.

Emmanuel Sanders joined the pile on (although Sanders was also critical of Brown.) So did Hines Ward. And Dieon Sanders. And just about anyone else the national media could find.

KDKA’s Bob Pompeani interviewed Ben Roethlisberger right before OTAs were set to start. Big Ben finally had a chance to strike back.

(OK, Brown didn’t specifically name Ben, and did launch several other critic tweets, but who are we kidding here?) Ben Roethlisberger certainly his made his mistakes as a person and as a teammate. But he was big enough to say “I was wrong” and “I am sorry” even when he probably didn’t even half to.

As for Brown? He was too busy tweeting things like “Two Face” to attend Raiders OTA’s. I guess that’s why Jon Gruden made sure to give him a contact that didn’t have any unguarantees….

One thought on “Take Away from Steelers OTAs Week One? Ben Roethlisberger is a Bigger Man than Antonio Brown”